Offalyman will need a strong finish at Wyndham Championship this weekend 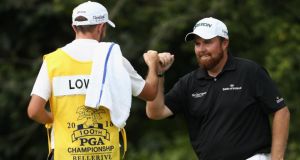 Shane Lowry of Ireland celebrates after making a birdie on the 13th green during the final round of the 2018 PGA Championship at Bellerive Country Club in St Louis, Missouri. Photo: Jamie Squire/Getty Images

Shane Lowry left Bellerive Country Club a tired man, but with renewed energy and a greater clarity on where he is headed. A difficult season has been turned around; and, while he has a last-ditch attempt to save his PGA Tour card at this week’s Wyndham Championship at Greensboro in North Carolina, it would seem that the greater part of his work will be done on the European Tour for the rest of the year.

A tied-12th finish in the US PGA – which earned a payday of €162,157 – doesn’t tell the entire story as Lowry was very much in the heat of battle for what was a gripping final day, what the Majors are all about. His quest for glory, and a higher finish, basically came undone with back-to-back bogeys on the 16th (more of that later) and 17th holes, as he finished with a 70 for 272, ultimately eight behind brilliant winner Brooks Koepka but only three shy of a tied-fourth that would have earned an exemption into next year’s US Masters.

While admitting to an obvious disappointment with the end result, Lowry – taking the glass half-full optimistic view – looked ahead to the immediate task in Greensboro: “That’s three weekends in a row I’ve been right up there. I’m back where I feel I belong. What more can I say? I have to go to Wyndham and try to get myself back up for that, which might be a little bit difficult over the next couple of days, but I have to now. I am playing the golf to compete again, and that’s what I’ll do.”

Lowry moved up 17 places, from 156th to 139th, on the latest FedEx Cup points table and needs to get inside the top-125 to retain his US tour card. Séamus Power (123), Graeme McDowell (143) and Pádraig Harrington (220) have similar missions, with Power the only one of the quartet currently with one hand on the card.

“I feel like I have got my mojo back and I have a bit of confidence more than anything else. I will go to Greensboro looking to contend as opposed to most of the year, going to try and make cuts. When you are trying to make cuts, you end up on the cut mark every Friday, and it just becomes demoralising. It’s a horrible place to be,” he said candidly.

Whatever happens in Greensboro, where he’d likely need a top-five finish to keep his card and get into the Northern Trust, the first of the playoff series events, Lowry’s focus down the road will be on playing out the season on the European Tour which he feels is his best way to get back into the world’s top-50 by year’s end. He is up to 81st following the US PGA.

Just last month at the British Open, Lowry had remarked he wasn’t in love with golf and golf wasn’t in love with him. There’s been a change since then. “I feel like I am back to myself,” he said, adding: “You have doubts in your own head, and you have people start doubting you. And it’s a lonely game and a tough place when you are not playing well. But when you are back, and you are competing, there is no better place in the world to be. That’s the reason why we endure the day you have at Carnoustie and things like that.”

A contributory factor in the improved confidence has been having his brother Alan on the bag, but that is a short-term arrangement with the four-week run finishing at the Wyndham. Lowry is in no rush to appoint a new fulltime bagman and will probably have his coach Neil Manchip on the bag for the Portugal Masters and his brother on the bag for the Dunhill Links. “I think I am going to play it out until the end of the year and then see if I can get someone I want or I like. It is tough because it is like trying to find a girlfriend or a wife you get on with and is single,” he quipped.

As Lowry explained: “They were getting me to drop it in the middle of the tree. I can’t, so where do I drop it? They’re saying, ‘drop it here’. But I drop it a club length to the left-hand side, which I am obviously going to do, it is still going to be in my way. But between ifs and buts, he wouldn’t make a decision. And I was like, ‘what? Do you know what I am going to do lads? I am just going to play. We’ll be here all day’. I didn’t’ want to wait around any longer and get another referee involved. It is what it is. It happened. It is not the end of the world.”

Justin Thomas also exonerated Lowry of any fault for a delay which also affected him, as he decided to play his shot while the argument went on. “It had nothing to do with Shane, the rules officials were having a hard time coming up with a ruling . . . . he wanted to make sure he got the right ruling because he was still in a position to finish really high in this tournament.”

Manchester City’s Kevin De Bruyne ruled out for up to six weeks 14:21
Angelo Mathews stands up to England attack as Sri Lanka hold firm 13:09
Conor McGregor feels like he’s ‘only starting’ in UFC career 13:02
TG4 to show matches and highlights from AFLW 12:40
Garry Ringrose returns as Leinster and Munster name teams 12:24
Here is your handy guide to sport on television this week