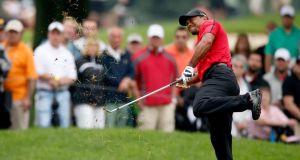 Tiger Woods injures his back as he hits out of the rough on the second hole during the final round of the World Golf Championships-Bridgestone Invitational at Firestone Country Club in 2014. Photo: Gregory Shamus/Getty Images

The image is etched in my memory, although it is probably even greater in Tiger Woods’. It was in August of 2014 that he suffered a back spasm during the final round of the WGC-Bridgestone Invitational that saw him leave the course and arrive into the players’ car park at Firestone Country Club.

“(I) just want to get out of here,” whispered Woods, in obvious pain. He was leaning against an SUV, attempting to change from his golf shoes into sneakers and the last thing in the world he wanted was to explain himself to a posse of golf writers who had abandoned what was going on out on the golf course for possibly an even bigger story.

Woods’ misery – he’d jarred his back when falling back into a bunker on the second hole after playing a shot – was to prove rather more long-term as he would undergo numerous surgical interventions for the back injury, the latest of which, spinal fusion, would appear to be successful.

The only thing missing since his return to competition is a victory. And, for good reason, it would be rather fitting if Woods were to tick that box at Akron this week in the WGC-Bridgestone Invitational, the last of its kind to be held on the course. From next year, the tournament will move to Tennessee where it will be rebranded as the WGC-St Jude Invitational.

Whatever about its reincarnation in a year’s time, it is fair to say that its association with Firestone Country Club has mainly revolved around one man: Woods! And if that image of him struggling to change shoes in the car park, and the feeling we were intruding on his discomfort, is part of a bigger story in the player’s painful struggle with a back injury that at one time seemed to have finished his career, there is also no doubt that Woods enjoyed more good times than bad at the tournament.

When it first burst onto the schedule as a WGC in 1999, sponsored by NEC, it was Woods who lifted the title. In successfully defending the title in 2000, Woods had a remarkable 11 strokes to spare over the runners-up, Justin Leonard and Phillip Price. In 2001, he made it a three-peat, winning for a third straight year.

In fact, Woods’s record in the tournament is remarkable even by his standards. He won for a fourth time in 2005 and, when it changed title sponsorship to Bridgestone in 2006, he reclaimed the title and then completed another three-peat in 2007. In all, he has won the event eight times, most recently in 2013.

This is Woods’s first time back at the Bridgestone since he was forced to withdraw in such pain in 2014. He only got into the field by the skin of his teeth, edging into 50th position on the official world rankings after the British Open. Is there some symmetry here? Fate, even? Wouldn’t it be something if, in its final time at Firestone, Woods were to rediscover the art of winning again?