McIlroy’s season has been one of great consistency, eight top-10 finishes 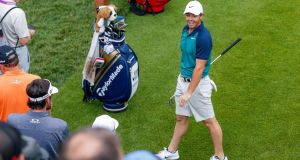 Rory McIlroy waiting to hit from the first tee during a practice round for the PGA Championship at Bellerive Country Club in St Louis, Missouri. Photograph: EPA

From clipping balls off the iconic Gateway Arch into the Mississippi river on Monday, a marketing gimmick, to the more serious side of finalising his preparations for a tilt at claiming another Wanamaker Trophy in this 100th edition of the US PGA Championship, Rory McIlroy has so far seemed to take everything in his stride since arriving in St Louis.

Somewhere, perhaps, he found time for a rain dance. His two previous victories in the US PGA came on rain-softened courses, at Kiawah Island in 2012 and Valhalla in 2014, and, like a present from the weather gods, heavy rainfall fell throughout Tuesday. If wet conditions are replicated at Bellerive Country Club McIlroy won’t be complaining

“It’s going to be the quintessential target golf, sort of. That’s what it is this week. Where your ball lands, is where it’s going to really stay,” he said.

The Northern Irishman gets his quest for a fifth career Major under way alongside Tiger Woods and Justin Thomas. “I guess it focuses you straight away,” he said of being put into the standout group.

“He’s in a place where he’s contending every week. As a player you go through spells where you don’t quite get over the line. But he’s still contending every week, and I admire his patience, and I admire the way he goes about it. I just think he’s in a place where it’s going to go ‘boom!’, and then he’s going to start winning a lot of golf tournaments again.”

McIlroy’s season has been one of great consistency, eight top-10 finishes in 18 tournaments. The elephant in the room is that he has only managed one win (in the Arnold Palmer Invitational) with a string of runner-up finishes, including at last month’s British Open. Yet he has managed to maintain a glass-half-full mentality.

“I mean, even from 2014 I’ve given myself some half chances at the Majors. I think my best chance since Valhalla was at the Open at Carnoustie, but in golf you just have to be an eternal optimist.

“You have to make the most of everything, you have to see the positives and just move on and forget about it, and that’s what I’ve tried to do this year. The times where I haven’t won and I haven’t played my best, I try to learn from it and I move on. There’s no point in reflecting on it too much or dwelling on it.”

“It’s certainly close,” said McIlroy of that quest for another win. “I mean, I’ve kept giving myself chances this year. I haven’t closed out those tournaments as I would have liked, but at least I’m putting myself in position, and that’s all I can do.

“I can just keep putting myself in position and learn from those experiences, good or bad, and try to use what I’ve learned and put it into practice the next time, I guess.

“So I’ve done well. I’m slowly getting back up the World Rankings. I started this year at 11th and I’m back up to fifth. I’ve done a lot of good things. The only thing I haven’t done is win enough. I’ve given myself a lot of chances.

“I played in a lot of final groups and I haven’t played well enough when it’s counted. So that’s something that I’m just trying to go through, and try to figure out what I need to do to make that little step from contending and getting into final groups to lifting trophies,” said McIlroy, aiming to close a four-year gap since his last Major triumph at Valhalla.

McIlroy was in the mix again in the WGC-Bridgestone Invitational last week, in the last group alongside Justin Thomas. Thomas closed the deal. McIlroy moved backwards, eventually finishing tied-sixth. The trouble has been getting all components to click at the one time. If it’s not his putting, it’s his wedge play. If it’s not his wedge play, it’s his iron play. Occasionally, very occasionally, it has to do with his driving.

“It’s still a work in progress. I’m still working on a few things in my swing, and trying to iron a few kinks out, but as long as I can keep working at it, and focus on just trying to become a better golfer, that’s all I can do. Right now I would love to take my chance in a final group here on Sunday again!”