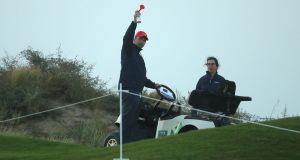 Maximilian Kieffer will take a one-shot lead into a marathon final day of the Oman Open after playing just three holes at the weather-disrupted event on Saturday.

The German had set the clubhouse target at five under as one of just 11 players to complete round two on Friday due to high winds and sandstorms.

Nobody could get past him as the second round was completed and when darkness brought an end to play in round three, pars in his first three holes were enough to hand the 28-year-old the solo lead.

Gavin Moynihan trails by four on one under par - he is one over par through six in his third round after opening efforts of 69 and 73.

India’s Gaganjeet Bhullar, Dane Joachim B Hansen and South African Brandon Stone were at four under, with all of the field yet to complete their third rounds and the final group facing 33 holes on Sunday.

Hansen was one ahead with two to play when he returned to finish round two but a bogey on the eighth dropped him into a share with Kieffer.

The Dane then double-bogeyed the second but bounced back with a birdie on the third in round three, while Bhullar and Stone were both level par for their first four holes.

Bhullar had completed eight holes in the morning in level par, with Stone carding a 70 after playing his entire second round on Saturday.

England’s David Horsey was at two under having played eight holes, while Scotland’s Scott Jamieson was on the same mark after six.