Out of Bounds: a change of date could boost the field at Irish Open 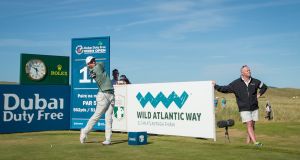 The topic of scheduling, be it for those who administer the sport of golf or those who make a living from hitting a white ball, can be like a migraine headache that refuses to go away. Sponsors, too, must at times wonder if there is any cure to the nagging issue.

The fact of the matter is that players simply cannot play week-in and week-out on tour. It is quite simply an impossible ask, and recent weeks - before we even get into the meat of the season - has only served to underline the pressures on players to pick and choose tournaments that best suit their ambitions.

Let’s set aside the debate about Rory McIlroy missing out on the DDF Irish Open for a moment.

Last week’s WGC-Mexico Championship had a €9 million purse for a limited field - you’d swear the roads to Mexico City were paved with gold. Still, the world number one Justin Rose decided that, no, it didn’t suit his scheduling. He didn’t go.

This week’s Honda Classic on the PGA Tour takes place in Palm Beach Gardens in Florida. It is quite literally on the doorstep of Tiger Woods. But, no, he won’t be playing. It doesn’t fit his schedule. Likewise McIlroy, who has opted to skip the tournament that is closest to his home.

So, you see, week-in and week-out different players decide on whether or not to play or not to play in tournaments. And, rightly, they do so based on their own agenda. The exceptions to the rules are the Majors; and, in fact, it is determining how best to prepare for the Masters, the US PGA, the US Open and the British Open that players set out their schedules.

Without going back over the reasoning behind McIlroy’s decision to miss out on the Irish Open at Lahinch, so that he has his best shot at winning the 148th Open at Royal Portrush, perhaps it is worth wondering if the Irish Open - the first of the so-called Links Swing that also takes in the Scottish (sandwiched nicely in the middle) and the British Opens - is in the most desired date in the calendar.

Shane Lowry was on RTE Radio’s “Game On” on Tuesday night and confessed that the Irish Open wasn’t in “an ideal date” for him either. Of course he’ll be there. But with grand designs on the Majors - and certainly on the Claret Jug - Lowry wondered if the Irish Open wouldn’t be better positioned later in the season, the week ahead of the BMW and running into the Alfred Dunhill Links the following week?

Such a change in the itinerary could actually make a hell of a lot of sense. Not only for getting rid of the thorny issue of scheduling in the run-up to the British Open, but also because of changes in the international calendars (the PGA Tour actually comes to a close in August nowadays so that it can pave the way for the American Football season).

And the European Tour has actually strengthened the latter part of its season, in the run-in to the Race to Dubai conclusion. The shifting of the BMW PGA from its traditional date in May was effectively forced on the European Tour by the moving of the US PGA from August to May, which kicks in this year. That move of the US PGA was brought about by golf’s return to the Olympic Games.

Another factor in support of moving the Irish Open to September is that it would no longer clash with the GAA’s two showpieces, as the All-Ireland hurling and football finals have been moved forward to August finishes.

The Irish Open has occupied the July date - two weeks before the British Open - for the past two years.

Admittedly, it does suit Dubai Duty Free who also sponsor the Irish Derby at The Curragh around the same time.

But a shift to the later date of September could be a win-win situation for players and administrators . . . and make it just a little easier for players to work out their scheduling in the run-up to the British Open.

FA say Liverpool knew about timing of potential FA Cup replay 15:34
Sports Extra customers get every LaLiga match at no extra cost 15:02
Six Nations: Pundits, journalists and players have their say 15:00
Irish striker Jonathan Afolabi joins Dunfermline on loan 14:27
Six Nations 2020: Scotland desperately need something to shout about 14:00
Here is your handy guide to sport on television this week