Martyn Turner: Us golfers have the measure of things as the great return beckons 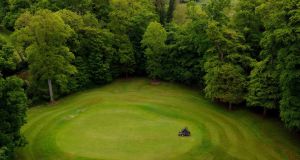 Bear with me. Physics and mechanics, two things for which I am supremely unqualified to comment on. But when did that ever stop me.

You know when you are driving and you get to one of those solar-powered speed signs that tell you how fast you are going. It says 68 but when you glance at your car’s speedometer it says 73. Someone must be wrong.

I was told once, by a Man In A Garage, that speedometers are set a little on the high side to encourage drivers to keep to the speed limits. They tell us we are going faster than we actually are. One doubts the truth of this since why would car manufacturers, who give us vehicles well able to travel at over 200kph, care about such mundane things as traffic laws.

But, if naively, we accept that the dials in your car aren’t exactly accurate then how do we know if the rest of it is right. Say your car tells you that the distance between your home and the golf club is 6.3km, how do you know this is right? It might be 7, could be 8, but I suspect most of us think it is 5.

In a survey of 10,000 randomly selected golfers I conducted this morning, in my head, 95 per cent told me that they lived ‘about 5km’ from their golf club.

We used to have a thing called an Irish Mile. It was about one and a quarter times the length of a standard mile. Now, I suspect, and I’m not encouraging this, don’t shoot the messenger, that we will see the birth of The Irish Golfing Kilometre.

We already know golfers are decidedly suspect when it comes to measuring length. “I played okay but I missed six two foot putts” is roughly translatable as “I played okay and had a number of putts within three club lengths of the hole and missed the lot”. So encouraging us to decide how far we live from the golf course is pretty well as useful as asking Donald Trump to explain quantum physics (or, for that matter, anything at all more advanced than ‘the cat sat on the mat’).

I think one of the problems with the new rules of golfing etiquette that might be difficult to keep is the two-metre rule. I am well able to maintain the gap as I am intimately acquainted with two metres. It is my exact height . . . 6ft 6 and two third inches” in old money. I was thinking of hiring myself out as a portable two-metre guide during the pandemic, to resolve disputes and promote social distancing but, at my age, getting up and down from lying flat is only something I can do once or twice a day.

One of our regular golfing number, and I can speak freely as he doesn’t read The Irish Times, is the ideal person with which to play socially distanced golf. He would struggle to be closer to two fairways of us at any time after we have teed off, never mind two metres. It is like taking the dog for a walk in a vast open space – you don’t see him until we sort of whistle him in when we step off the 18th green so he knows it is time to come in and buy us a drink.

During cocooning I enjoyed the very occasional email from my golf club in Ireland, just 5km away, telling me the green staff had been beavering away on our behalf and all was looking well, if not a trifle empty. The club in France with which I have a slight membership have been emailing me every day. The professionals have been sending daily exercises to keep us ‘en forme’ during lockdown and we have been blessed with short videos of what the rest of the staff have been doing at home. Cooking and singing mainly, it seems.

The courses in France opened last Monday, and I was getting emails from alleged friends there asking me if I wanted to play . . . Hoho. Last Monday came and Her Indoors told me, according to her smart phone, that in our particular corner of France the weather was averse, in other words it was raining chats and chiens. Hohohohohoho, I thought.

When my alleged friends did get onto the course on Tuesday they were greeted with a gismo illustrated in the attached photographs. I hope you can see them. They are little gadgets that seem to be made out of brass coat-hanger wire that allow you to take the ball out of the hole without touching the flagstick.

I was going to propose that we all invested in those plastic yokes that you can buy to practice putting on the carpet . . . if you get the ball in the mouth of the yoke it spits it back out at you. So I’m told, never managed it myself. But these might be better. Do we have them? Are they a French thing or a world thing? Hopefully, one day soon, now the over 70s are allowed out and as I live 5km from the golf club, I may find out.

Speaking of France . . . if I was there I would be playing with a friend who flies in from San Francisco every year for a bit of R&R . . . oh, how the other half live. As we weren’t going to be able to meet this year I send him a photo of me practising my pitching in our over large garden (we bought a boggy acre 40 years ago and planted trees on it. I think they are giant redwoods by the height of them).

He sent me back a photo of him practising his driving in his studio! He is a sculptor in steel, large pieces. His studio is bigger than our garden. That is one up to him, then . . .

1 Seán O’Brien: Anger over my parents’ break-up never left me
2 Connacht come out on top in nine-try clash with Edinburgh
3 Jamie Vardy comes on to score winner at Arsenal
4 Mayo relegated for first time in 23 years after pulsating Tyrone encounter
5 Dan Martin back to third in Vuelta after a wet and wild Stage 6
Real news has value SUBSCRIBE