Harrington staying put in Ireland and working on his putting

‘You’re not to travel ... and going out there for my golf is far from necessary’ 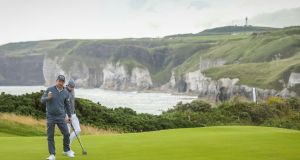 It looks like Pádraig Harrington will continue changing the habit of a lifetime, in working on a new putting routine in the comfort of his own back garden. For, while the PGA Tour is set to resume next month with the Charles Schwab Challenge at The Colonial Country Club in Texas, the little matter of only essential foreign travel being currently permitted out of Ireland means the Dubliner won’t be flying any time soon.

“We’re still not allowed travel from Ireland. First and foremost, there is no unnecessary travel, that’s there and ever present. At the moment, you’re not to travel for no reason and going out there for my golf is far from necessary, so I assume I am not to travel. Obviously, that’s going to change [at some point] but for now unnecessary travel isn’t meant to be undertaken,” said Harrington.

Even if he could go, there’d be the matter of thinking twice about going given that the PGA Tour’s comprehensive advice ahead of rebooting the season – with a run of four behind-closed-doors tournaments, starting in Texas – will also entail serving a 14-day quarantine for anyone travelling into the United States from abroad.

For Harrington, that option – when placed against the quality time he’s enjoying with family at home – isn’t too appealing. “Is that two weeks sitting in a hotel room for two weeks compared to sitting in my house? I don’t think I would go through that . . . having to travel and isolate on your own in a room for two weeks is something you’d never do by choice. At this stage, unnecessary travel is not allowed, and in many ways you’d rather things like that,” said Harrington of the decision-making effectively being taken out of his own hands.

While Ireland’s other PGA Tour card carrying players are all currently based in the USA – with Rory McIlroy and Graeme McDowell living in Florida, Séamus Power resident stateside since attending university in Tennessee and Shane Lowry renting a house – Harrington, at home in the foothills of the Dublin mountains, has been spending his time making extremely good coaching videos and also continuing to work on a new putting routine.

In describing how there is a groundhog sort of feeling to one day after another, Harrington – with his European Ryder Cup captain’s hat also on – would like to get out on tour whenever that is possible as much to see players “show form”.

“I’d need about six weeks to see a player’s form,” he said, with an eye on the Ryder Cup match at Whistling Straits in September which remains on the calendar.

As for any return to play in Europe, Harrington points to something revealed by Eddie Pepperell recently. “Yes, I know Eddie talked about the British Masters as the intended start and they’re looking to run a number of smaller events in the UK, four events they’re looking to run in consecutive weeks at resorts, all enclosed.” Time will tell how that roadmap to a European Tour restart goes.

But time at home has been productive too. “On a personal front, I am enjoying my own practice. I have missed [tour life] a lot but I am okay with the break.

“ If [tournaments] were going on, I would want to be involved but, if it’s not going on, even though I realise every year I lose at this end of my career is a tough year to lose in some ways and I would want to be there competing, at the moment I am content working away at things.

“Golfing-wise, I am enjoying what I am doing. I have been trying to change my putting routine which takes a lot of effort and I couldn’t be doing that during competitive play. It’s a routine that has been built over 43 years and I am trying to break it down in a few months.”

A sign of how much practice Harrington has managed is reflected in the wear and tear on his equipment. He has gone through three drivers and two regrips. “I’ve split five golf balls in my bay. I have hit them so many times they actually end up cracking. I’ve hit a lot of golf shots.”

And, then, there have been the stream of coaching videos (60 and counting) which have been a huge hit on the various social media sites. His son, Paddy, does the camera work and Pádraig himself the editing. “At the start, the first couple would take me hours to get the stuff done but I figured out it is as well to do shorter videos. I only have to look back over two or three minutes instead of 10, and you don’t make as many mistakes in two or three minutes as you do in 10.”

Those tips will get an airing of sorts next week when phase one of the restrictions in the Republic are lifted and Harrington – like many club members – will get the chance to return to the fairways and, luckily for him, the three-time Major champion has a number of courses within the 5km travel limit.