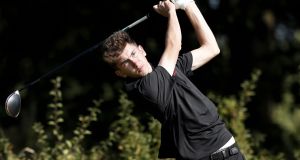 Tom McKibbin in action for Britain and Ireland during day two of The Jacques Leglise Trophy at Aldeburgh Golf Club in Edinburgh last August. Photograph: Luke Walker/R&A/R&A via Getty Images

At 17 years old, Northern Ireland’s Tom McKibbin can comfortably be considered one of the world’s best junior golfers. Last year, he won the prestigious Junior Invitational title at Sage Valley Golf Club in the United States, considered by many to be the number one tournament in the world for young golfers.

The trophy joined a groaning cabinet at home that is already filled with two Honda Junior Classic titles. Still a student at Belfast Royal Academy (BRA), McKibbin’s globetrotting golf trolley has rarely been as idle.

“Normally, I would be at home for like two or three weeks, then I would be off travelling abroad to a tournament to compete. This period has really made me realise just how much I miss the simple things like getting onto the course to play.”

When I was younger, I was lucky enough that I had a good basic ability at most sports, but with golf, I just kept getting better and better

McKibbin’s parents, Sara and Robin, are a critical support to his golfing ambitions. His parents both work full-time and juggle their professional commitments with helping McKibbin achieve his sporting dreams. At the start of each year, the family sit down at the dinner table and plot the best amateur tournaments in the world where McKibbin can gain the best ranking points.

Sara will mastermind the logistics, while Robin will travel with his son and carry his bag at tournaments across the world. McKibbin understands the time and financial sacrifices that his parents are making acutely.

“I’m an only child, and it’s incredible the amount that mum and dad continue to sacrifice for me. They give everything to support my career and I hugely appreciate it. Dad carries my bag at individual tournaments, and it’s always good to have him there, while mum does so much work behind the scenes to ensure that we can travel all over the world.”

Neither of McKibbin’s parents comes from a golfing background, and their son’s initial sporting preferences were rugby and football. It was only when a football team-mate’s father took a seven-year-old McKibbin to a local driving range that the love affair with golf started.

McKibbin realised relatively quickly that he was able to connect with the ball harder and better than many of his junior contemporaries and even the local club pros.

“When I was younger, I was lucky enough that I had a good basic ability at most sports, but with golf, I just kept getting better and better. When you’re younger, that’s really exciting, especially when you see the ball fly further. I was always extremely competitive, even from a very young age, and just wanted to push myself further. I was winning a lot of junior tournaments and when I was hitting it better than some pros, I started to get really serious.”

This year, before the lockdown, McKibbin had travelled to South Africa, Australia (where he placed second in the Australian Amateur Championship), France and Spain to play in elite amateur tournaments. His school uniform often sits starched in his wardrobe at home in Belfast.

Through a busy calendar of international tournaments, he has made friends with a wide variety of elite amateur players from across the world who he keeps in regular contact with. He combines competition on the course and arduous work in the weights room with his studies at school. His school has been supportive of his golf dreams, supporting him with online study, and welcoming him back to the classroom between tournaments.

“BRA has been incredible in the support that they have given me, I can’t think of many other schools that would have helped me in the way they have. They got me through my GCSEs, and whatever they can do to support me they do it . . . I am lucky that I have had the same friends since I was four or five, so nobody at school treats me any differently to anyone else. They’re used to me being away with golf, so I think when I come back to school it’s just a surprise, like ‘ah yeah there’s Tom’. They just treat me the same as anyone else, which is great because I’ve known so many of them for so long.”

Outside of the classroom, McKibbin has a friend who understands the pressure and expectation of a talented junior golfer better than almost anyone else. McKibbin first met Rory McIlroy as a 13-year-old when he was practising on the putting green at a tournament in Dubai and McIlroy came over to introduce himself. McKibbin is a member of McIlroy’s home club in Holywood, Co Down and the golfing superstar had heard of about the talented young golfer from Newtownabbey. Today, McKibbin regularly leans on McIlroy as a trusted sounding board as he plots out golfing dreams.

I am lucky that I still love golf. All I want to do is get better

“I am really lucky to know someone like Rory and I’ve been lucky enough to play with him a few times. I feel can ring him anytime I need to and he’ll always try to help me, whether it’s just to talk, give advice or to be supportive as he knows exactly what it’s like to be playing this level of golf at this age.”

After school, McKibbin intends to attend the University of Florida and join its illustrious golf team where he hopes to follow 33 of its alumni who have gone on to compete on the PGA Tour. McKibbin confesses that swapping the frequently wet and windy conditions he battles on Northern Irish courses for year-round sun on the practice green in Gainsville, Florida is a tempting prospect.

With increasing attention on the golfer not only in Ireland but globally, does he feel any pressure to live up to vaunted expectations at such a young age?

“Not really to be honest. I’m lucky to be able to play golf and do something that I love to do and it’s also something I am good at. I always prepare really well, but the thing is with golf, it can be a weird game. You can have a great day, then you can have a terrible day. As long as you can say that you’ve practised hard and have tried your best, what more can you do?”

McKibbin’s young life is almost solely dedicated to golf and his dream of becoming the best professional possible. He understands that the climb to the summit will be long and arduous, filled with countless unexpected challenges en route. He spends up to four hours a day working on a putting green and net that his dad has constructed on the side of their garden in Newtownabbey.

McKibbin is spending the lockdown finessing his skills relentlessly at home far from the manicured greens of the professional tour that he dreams about.

“I am lucky that I still love golf. All I want to do is get better. It is enjoyable, but also as it’s got more serious. When I was a kid, it was just all about going out and playing with your friends, now I am completely focused on getting the best results possible.”