‘It’s not the way a leader should act. There’s a sort of diplomacy that you need to have’ 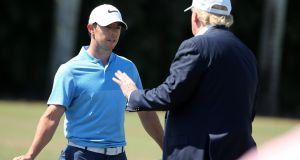 Rory McIlroy: “I don’t know if he’d want to play with me again after what I just said. But I wouldn’t [play with him again].’’

Rory McIlroy has criticised US president Donald Trump’s response to the coronavirus crisis and said he would not play golf with him again.

The world number one golfer said on the McKellar Golf podcast that he has not played golf with Trump since and when asked if the reason he hasn’t played again, McIlroy said, “Out of choice”.

The Northern Irishman said the round he played with Trump was enjoyable and that he was “charismatic” and had an “X Factor”. But he followed by saying “that doesn’t mean that I agree with everything - or in fact anything - that he says.”

“We’re in the midst of something that’s pretty serious right now and the fact that he’s trying to politicise it and make it a campaign rally and say we’re administering the most tests in world like it is a contest - there’s something that just is terrible,’’ McIlroy said.

“It’s not the way a leader should act. There’s a sort of diplomacy that you need to have, and I don’t think he’s showing that - especially in these times.’’

McIlroy, who lives close to the US president’s residence in Palm Beach, Florida, said, “I don’t know if he’d want to play with me again after what I just said. But I wouldn’t [play with him again].’’

McIlroy faced an online backlash after the round with Trump in 2017 and released a statement at the time saying that playing golf with Trump “wasn’t an endorsement nor a political statement of any kind’, and that it was “simply, a round of golf”. McIlroy hit back at his critics via social media by saying: “To be called a fascist and a bigot by some people because I spent time in someone’s company is just ridiculous.

“I felt I would have been making more of a statement if I had turned it down. It was a round of golf and nothing more,” McIlroy said.

A few months after the round, McIlroy said he would “think twice” about playing golf with him again. In the Second Coming of Tiger Woods book, Michael Bamberger writes that when Tiger Woods played with Trump in late 2017, McIlroy passed on the invitation.

In 2016, McIlroy tweeted: “With Brexit and the way the US presidential race is going . . . can we take a mulligan on 2016??”, suggesting that he would not have voted for Trump.

The 31-year-old also discussed the staging of the Ryder Cup this year in an interview with golf journalists John Huggan and Lawrence Donegan. McIlroy said it would be “asking a bit too much” to the players to play the tournament behind closed doors as “the majority of players wouldn’t want to play it that way”.

“I definitely don’t think the Ryder Cup would be the same. You wouldn’t get the reactions that you see anywhere else, you would never get a match like my match with Patrick Reed in 2016.

“We would all much rather it be played in front of fans. If we have to wait a year for that to happen, that’s what should happen.”

McIlroy will team up with Dustin Johnson to play a charity exhibition match against Rickie Fowler and Matthew Wolff on Sunday at Seminole Golf Club in Florida, played behind closed doors and adhering to social distancing regulations, with the match raising money and awareness for organisations helping with relief efforts for Covid-19. McIlroy confirmed that he will carry his own bag for the contest, which he hopes will portray a good image of golf as a safe sport during the pandemic.

The match will be broadcast on Sky Sports from 7pm.