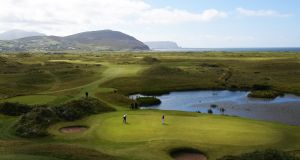 Ballyliffin Golf Club in Donegal has approximately 30 per cent of its membership who reside in Northern Ireland. Photograph: Charles McQuillan/R&A via Getty Images

It’s a funny one, but not funny in any ha-ha sort of way; and certainly not for any golfers in those Border counties living outside the designated 5km travel distance due to be implemented for golf’s return in less than a fortnight’s time.

For, when golf resumes on May 18th in the first phase of the relaxing of restrictions, those beyond-5km outliers deprived of the opportunity to golf will potentially have to watch in some bemused state as cross-Border visitors with yellow car registrations from further afield arrive to play in the Republic.

With no return date as of yet for golfing activities in the North (a roadmap is expected this coming Sunday), a loophole in the movement restrictions which allows those from Northern Ireland to travel into the Republic for non-essential reasons without facing penalty will likely see an influx of northerners who have membership in golf clubs in the Republic intent on playing again.

So, theoretically, come the resumption of play in May 18th, you could have somebody travelling 40km from Derry to play in Ballyliffin, but a fellow-member residing say 10km from the links who is not allowed play.

It’s an anomaly of the head-scratching variety, that’s for sure, especially for those on the wrong side of the 5km rule who have been left outside the loop and who will have to wait until phase two of the easing measures on June 8th when the limit is extended to 20km. It will be July 20th before the limit is brought beyond 20km.

For now, the first phase of golf’s resumption relates to those living inside the 5km limit, although that is another matter altogether. “In a rural setting, 5km is nothing,” remarked John Farren of Ballyliffin, adding that it would be difficult to police. “We’re not going to be the watchdog,” he said, making the point that there would likely be extra manpower requirements on the club to ensure the greater priority of physical distancing and social measures were maintained.

“Are we expected to be there from dawn to dusk?” he wondered.

Daragh Lyons, in Portsalon, also queried the amount of clarity on the issues that has yet to come the way of clubs. “I know the GUI haven’t released anything officially in terms of guidelines but I am surprised that it wasn’t if you’re a member of the club you can travel to play golf,” he said of the restrictions, then asking the question: “If you are going to your hardware store and gardening store, is that going to be 5km as well?”

Rossmore Golf Club in Co Monaghan has a membership of around 500, with an estimated 15 to 20 per cent resident in Northern Ireland. The topic about some of their members being able to cross the Border from the North to play even if outside the 5km limit while other members resident in the Republic who failed to meet the distance criteria being required to stay at home was one which occupied those running the club to the extent that they yesterday wrote a letter to the GUI.

“It just doesn’t make any sense,” said John Heffernan, who proposed other options rather than the suggested 5km limit which he claimed would “seriously impact” their running of the club.

The GUI and the ILGU have promised to issue protocols to all clubs by the end of the week.