‘It seems like a lifetime since we were out’ 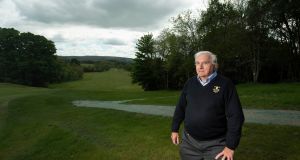 Hugging the shores of Lough Swilly, the golf course at Barnhill, Co Donegal is spread over 146 acres on the outskirts of Letterkenny. For weeks it has been silent, closed like all others in the Republic.

On Monday, however, the Letterkenny Golf Club’s time-sheet is filled to capacity as the club reopens after closing in accordance with the Government’s Covid-19 measures. For most of its 600 members the sound of a ball rolling into a cup cannot come too soon.

Members are “chomping at the bit” to get back, says honorary secretary Barry Ramsay, especially following weeks of fine weather: “It’s no different to other golf clubs, members simply can’t wait to get out playing.

“For many, including myself, it seems like a lifetime since we were out,” says Ramsay, though the club took the opportunity to sort out some drainage issues and repair bridges on the course.

The club has had its own moments during the close-down, notably on April 24th when local gardaí were called after a passerby thought they had spotted people out on the course playing a few holes.

However, it quickly became apparent that club members had, instead, been out filling in divots with sand and seed, and they were given a green light to carry on once explanations were given. Ramsay hopes it will be the last engagement the club has with the law. The majority of members live in Letterkenny, with few living in Northern Ireland, though the course is popular with northern golf societies, Ramsay tells The Irish Times.

However, it is, he points out, not the club’s responsibility to administer the 5km travel rule that stays in place as part of the Covid-19 measures, despite the partial relaxation that occurs on Monday in the first of five phases as planned by the Government.

Covid-19 has caused financial troubles for all golf clubs, though Letterkenny has been one of the lucky ones at a time when some clubs are talking of closing their doors for good.

Nearly 450 of the 600 members have continued to pay membership fees during the closure: “We completely understand that many people have lost their jobs and money is tight. Hopefully, that will just be a temporary thing.”

Under the watchful eye of both captains, Ed Margey and Celine Markey, the club has strict rules in place for the re-opening. Eight volunteer marshalls will enforce social distancing rules out on course during play.

“We are just delighted that we are able to reopen and we want to ensure that we stay open and that is why we are taking things so seriously,” says Ramsay, “The guidelines are there and we are following them as closely as we can.”