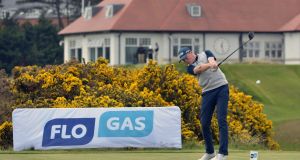 Robin Dawson driving at the 11th during day two of the Flogas Irish Amateur Open Championship at Royal County Down. Photograph: Pat Cashman

Tramore’s Robin Dawson kept his cool for the second day running to take a two-stroke lead into the third round of the Flogas Irish Amateur Open at Royal County Down.

Two under for his round after five holes, he didn’t panic as the southeast wind got up and he bogeyed the 8th, 14th and 15th to slip to one over.

After hitting a 97-yard wedge to six feet at the last, the 22-year-old international confidently rolled it home to add a level par 71 to his stunning opening 65 to lead on six-under-par from England’s Alex Fitzpatrick, younger brother of Ryder Cup player Matthew.

“It was pretty nice at the start but then playing down 12, 13, 14 the wind really started to pick up,” said Dawson, who is seeking his first big win since the 2013 Irish Boys. “I was thinking I actually haven’t a bad score going. So I’m kind of happy enough in the end.

“It’s a funny course. You can get a few kicks here and there, and you have a great score going. If you miss a green, you roll off 20, 30 yards, and then you’re chasing.

“You’ve just got to stay patient here. It’s a mental test. You really got to plot your way around here. It’s not a big driver’s golf course. You don’t have to overpower it. I like the way you have to think your way around.”

Fitzpatrick added a 70 to his first round 68 to be Dawson’s nearest rival on five-under, and believes he has got the perfect game to conquer Royal County Down, where he watched his brother finish eighth in the Dubai Duty Free Irish Open three years ago. “I walked around,” the 19-year-old from Sheffield recalled. “It was hammering it down.”

He is loving it this week, however, and likes his chances on a course where course management is key. “I’ve got a two iron that gets three feet off the ground. I think it does suit me. I’ve hit driver five times this week. Two iron is a pretty handy club to have.”

Castle’s Alex Gleeson triple bogeyed the 15th en route to a 74 that leaves him tied for third on level par with England’s Andrew Wilson.

Title favourite Matthew Jordan from Royal Liverpool bogeyed the last four holes for a 74 to slip seven shots behind Dawson on one-over.

Portmarnock’s James Fox birdied the 16th and 17th for a solid 72 to share fifth place on one-over, with West of Ireland champion and Bridgestone Order of Merit leader Rob Brazill tied 18th on three over after a 72.