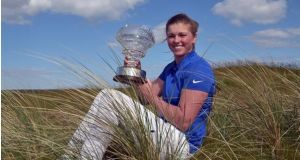 The Flogas Irish Amateur Open returns to Royal County Down next weekend boasting the highest quality field ever assembled. Douglas international Peter O’Keeffe will defend Ireland’s premier strokeplay championship and he will have to contend with a world class entry featuring 90 overseas players from 11 countries.

This year’s starting list has been increased by six places, the maximum allowable, to 138 players due to the quantity and quality of entries received. O’Keeffe had three shots to spare last year, winning his first major championship at 35 years of age.

The Cork native spent five years on the professional circuit before reverting to the amateur game. On the back of his Irish Amateur success O’Keeffe played his way onto the Ireland team, earning his first cap at the Home Internationals.

The defending champion is one of five current Ireland internationals in the field. Warrenpoint’s Colm Campbell, champion in 2016, will be close to home at Royal County Down.

Alex Gleeson from Castle secured a top 10 finish last year, and was next best of the home challengers behind O’Keeffe. His form so far this season – runner-up at the West of Ireland, he was second again at the European Nations Cup – suggests a big win is getting closer.

Five members of this year’s European Bonallack Trophy team will tee it up at Royal Co Down including Tramore’s Robin Dawson, who is the highest ranked Irish player in the field. Norway’s Kristoffer Reitan, tied second alongside Gleeson at the Euro Nations, and Germany’s Marc Hammer also make the trip. England won the team title at the European Nations and all four members of the side will contest the Irish Amateur.

Todd Clements, leading individual at Sotogrande, is the highest ranked player in the field and is joined by Bonallack teammate Matthew Jordan, a winner already this season at the Lytham Trophy and clearly a man who relishes the links having captured the St Andrews Links Trophy in 2017. Jordan was tied fourth at Royal Co Down last year.

And with 42 players in the field, England is the most likely destination if the title does go abroad. South Africa is well represented once more with nine players travelling to RCD. Austria (1), Denmark (3), France (6), Netherlands (1), Scotland (12), USA (2) and Wales (3) are the other countries represented.

In terms of the Bridgestone Order of Merit, there are potentially 425 points on offer for the winner and if Rob Brazill from Naas, the current leader, was to pick up this title he would be all but assured of his place on the Ireland team for the Home Internationals in September.

Play commences on Thursday with the top 50 and ties progressing to the final round on Sunday, following a 54-hole cut.

St Margaret’s Shane Jenkinson showed the rest a clean pair of heels when he cruised to an emphatic five-stroke victory in the Ruddy Cup for Trainee Professionals at The European Club.

He overcame a stiff wind and heavy rain, carding three birdies – at the sixth, 12th and 13th – against four bogeys in a one-over-par 72 to be one of just four players in the field to break 80.

“It was brutal, end of the world stuff to play in,” said Dubliner Shane who recently completed his third year PGA exams. “I haven’t been playing much because of the exams and I’ve also had injury issues. I did a Tony Finau. I popped my ankle playing football a few weeks ago.”

The 29-year-old St Margaret’s assistant went to the turn in two over 37 and came back in one under 35 which included back-to-back birdies on the 12th and 13th.

Sponsor Pat Ruddy applauded the efforts of the winner in coping with the conditions. “The players had their work cut out because of the weather so congratulations to Shane, it was a very good score,” said Pat.

He took home the €1,000 first prize as Corrstown’s Craig Melvin claimed the runner-up spot with a 77. Royal Tara’s Stephen Brady and Craddockstown’s Liam Whelan tied for third with 78s but title holder Richard Kilpatrick had to settle for a share of ninth after an 82.

Birr’s Billy Donlon shot the low round of day to win the Munster Seniors Amateur Open on a countback at Ennis. A two-over par 72 was three shots better than the field and while he tied on eight-over 148, his superior second round was enough to secure the title from Tramore’s John Mitchell, who closed with a 76.

Limerick’s Dermot Morris was third, three shot off the pace after rounds of 73 and 78 while Tralee’s Gerard O’Sullivan won the best nett with 153 and Naas’ Maurice Kelly took the veterans’ title.

Dun Laoghaire’s Alan Fahy was the big mover on the Bridgestone Order of Merit following his victory at the Munster Strokeplay while Robert Brazill increased his lead at the top in his quest for a place in the Ireland team at this year’s Home Internationals.

Fahy, who represented Ireland at boys level in 2015 and 2016, collected 150 order of merit points for his efforts in Cork and is now third overall, just 10 points behind Alex Gleeson. The Castle international was competing at the Lytham Trophy so did not have the chance to close the gap on Brazill at the top, who now has a lead of 125 points.

Portmarnock’s Jack Pierse was tied for eighth at the Munster Strokeplay, collecting 55 points, and moved up to fourth in the Bridgestone table. Warrenpoint’s Ryan Gribben is now seventh overall having finished second to Fahy in Cork. Gribben’s closing 66, the best of the final round, pushed him ahead of Waterford’s Eanna Griffin on countback.

West Waterford’s Gary Hurley won a place in the Andalucia – Costa del Sol Match Play 9 which starts on Thursday when he tied for fourth in the Challenge Tour’s Open de Portugal.

Just two strokes off the lead starting the last round at Morgado Golf and Country Club, Hurley got to within two shots of the lead with an eagle at the par-five 16th. But he bogeyed the last and signed for a one-under 71 that left him tied for fourth on four-under, three strokes behind Australian Dimitrios Papadatos, who shot 69 to win by two shots from Portugal’s José-Filipe Lima and Frenchman Antoine Rozner (70) on seven-under par.

Hurley – who made two eagles, 15 birdies and 15 bogeys- picked up €9,100 for his four-way tie for fourth, which was his best finish on tour since he tied for fourth in the Challenge Tour’s Montecchia Open by Lyoness two years ago.

The cheque leaves him 37th in the Road to Ras Al Khaimah Rankings after just three starts, 9,000 points outside the top 15 who gain promotion with the top-10 finish crucially earning him a spot in Andalucia - Costa del Sol Match Play 9 at Valle Romano Golf.

Ballymena’s Dermot McElroy was the next best of the Irish, tied for 45th on four-over after a 73 with Tullamore’s Stuart Grehan (76) 63rd on 10-over and Moyola Park’s Chris Selfridge (79) two shots further back in 69th.