Tiger Woods rolls back the years with 65 at TPC Sawgrass 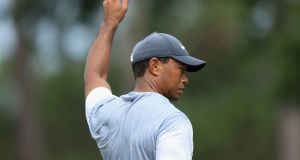 Tiger Woods shot a third round 65 at The Players. Photograph: Sam Greenwood/Getty

Woods only beat the cut by one shot on Friday evening after posting a second-round 71.

But he was back to his best on Saturday as he rose from tied 68th into the top 10 by early afternoon, and he was even eight under through 12 holes.

At one stage Woods looked capable of threatening his career-best round of 61, or going even lower, but the birdies then dried up.

The 14-time major winner, fit again after an injury-enforced spell off the tour, had struggled off the tee over the first two days and did not have too many realistic birdie chances.

But on day three the 42-year-old rolled in birdies on the opening two holes — the first one from 15 feet — and the putter stayed hot on the fourth and fifth greens.

Woods drained a 17-footer on the fifth and further birdies followed at seven and nine, where he two-putted from 40 feet.

It saw Woods make the turn in 30, two shots better than his previous best front-nine score at Sawgrass and his lowest nine-hole score since 2009.

Woods picked up another shot at the par-five 11th and sank an eight-foot putt for birdie on 12.

But he made his first mistake at 14 when he caught an awful lie from a wild tee shot and an underwhelming chip resulted in a two-putt bogey.

Woods still had the course record of 63 in his sights as he began the tough last three-hole stretch.

But an eight-foot birdie chance at the 16th lipped out and his shot to the island green 17th ended 43 feet away, although he tidied up in par.

Another birdie chance slipped away at the last after he had hit a nine iron from 193 yards to within 17 feet.

Meanwhile Shane Lowry enjoyed another solid day, posting a three under par 69 on Saturday to move to four under for the tournament, having just scraped inside the cut mark.

Lowry made four birdies and dropped a single stroke as he moved into a share of 42nd place in Florida.

Jordan Spieth was also among the early starters and, like Woods, sprinted up the leaderboard with a seven-under 65.

Spieth, who has struggled at Sawgrass in recent years, had nine birdies and two bogeys in outshining playing partner Justin Thomas, who carded a 68.

Woods and Spieth were both seven shots behind Simpson, who was about to start his third round holding a five-shot lead over Charl Schwartzel, Patrick Cantlay and Danny Lee.

Woods said in a video released by the PGA Tour: “I birdied the first couple of holes and just kept it rolling. I hit a lot of good shots and it was nice to see a few putts go in. Over the whole day I hit a lot of quality shots — 65 was probably as high as I could have shot today, which was nice.”

He admitted there was a tinge of disappointment he could not keep the momentum going all the way through to the end of the round.

Woods said: “Yeah, to be eight under through 12, realistically, I could have got a couple more out of it and got to 10 for the day.

“I’ve got my playing feels back and it’s just executing and putting the shots together. I knew I had to be more aggressive today and I was able to convert.”

“These guys are going to go low again and some of then will probably shoot lower scores than I did. It’s definitely gettable. I know there’s a lot of pressure coming down the back nine, but the golf course has been set up to go low.”