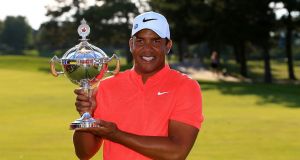 Jhonattan Vegas emphatically ended a poor run of form by successfully defending his Canadian Open title with a play-off victory over Charley Hoffman at Glen Abbey Golf Club in Oakville on Sunday.

Venezuelan Vegas, who missed the cut in his last five PGA Tour starts, tapped in for birdie at the first play-off hole - the par-five 18th - moments before overnight leader Hoffman failed to hole out from a greenside bunker.

Meanwhile Seamus Power secured his first ever top-10 finish on the PGA Tour after a closing round of 66 left him tied for 10th place.

The Waterford man is battling to keep his card for next season and was projected to jump inside the top 125 on the FedEx Cup standings thanks to his strong finish.

With the first 125 players maintaining their playing privileges, Power will need to maintain this sort of form.

Two birdies on the front nine got him off to a good start before hitting a run of four birdies in a row from the 13th to the 17th before dropping a shot at the 17th.

However, a closing birdie added up to a 66 and a total of -16, five shots behind eventual winner Vegas.

“I came in here on a really long stretch of five missed cuts, not playing great golf, did a little bit of change on my Mizuno irons this week and it was magic to be honest.”

Both players started the playoff by sending their drives into fairway bunkers but Vegas found some luck when his second shot took a chunk out of the lip of the left bunker yet still carried just off the far edge of the green.

His ball settled in the same area it did in regulation, only that time he chipped it well past the hole and then two-putted for par.

The 32-year-old clearly learned from his earlier miscue as he chipped beautifully to tap-in range for birdie and then celebrated moments later when Hoffman failed to hole out from a greenside bunker.

The victory marked the third career PGA Tour win for Vegas and his first since last year’s Canadian Open where he birdied the final three holes for a one-stroke victory.

This time around Vegas, with three groups still behind him, came to the final hole one shot clear of Hoffman but, for the first time all week, failed to birdie the 18th and had to watch the rest unfold on TV.

Hoffman (68) had a long eagle chance for the win in regulation at 18 but his putt went past the right edge of the cup.

Ian Poulter’s inspiring bid to claim his first PGA Tour victory since 2012 fell short despite a flawless eight-birdie closing round that left the Briton alone in third place and one shot from making the playoff.

World number one Dustin Johnson (67), who started the day five shots back of Hoffman, had an eagle and three birdies but was unable to take full advantage of ideal scoring conditions and finished four shots back in a share of eighth.

British Open runner-up Matt Kuchar, who battled dizziness in his first round and barely made the cut, finished 10-under for the tournament and in share of 32nd place.