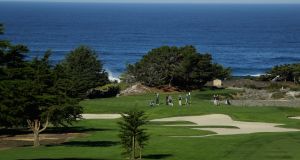 The view across Spyglass Hill as players practice on Wednesday ahead of the AT&T Pebble Beach Pro-Am. Photograph: Warren Little/Getty Images

Dustin Johnson admits he faces a tough task to hold on to his position as world number one, starting at this week’s AT&T Pebble Beach Pro-Am.

Johnson won the Sentry Tournament of Champions by eight shots in January and was also ninth in the Abu Dhabi HSBC Championship on the European Tour.

However, the former US Open champion has a huge amount of world ranking points to defend in the coming weeks, having finished third at Pebble Beach last year and then winning his next three events before injury prevented him from competing in the Masters.

And world number two Jon Rahm could overtake Johnson with a third victory in six events on Sunday, a meteoric rise from a player who only turned professional in June 2016 with a ranking of 551st.

“It’s just how it goes,” Johnson told a pre-tournament press conference. “If I keep playing well and keep winning then I’m going to stay number one. But if I don’t play well there’s a lot of really good players that are playing really well right now.

“So it’s going to be tough for me to keep it, but if I keep playing like I am and how I should, then, yeah, I’ll be there at the end of the year.”

“I just really enjoy coming here,” Johnson, 33, added. “I enjoy the courses (Pebble Beach, Spyglass Hill and Monterey Peninsula), they’re a lot of fun to play. This event is a special event. You get an amateur partner, you play with one other pro and his partner, it’s just a lot of fun.”

Rahm was fifth on his debut in 2017 and needs to win and see Johnson finish outside the top 45 to move to the top of the rankings.

Johnson and defending champion Jordan Spieth will play together in the first three rounds, with Rory McIlroy — who is making his tournament debut — alongside four-time winner Phil Mickelson.

McIlroy missed the cut in the 2010 US Open after rounds of 75 and 77, but has started the season with a tie for third in Abu Dhabi and finishing runner-up in Dubai.