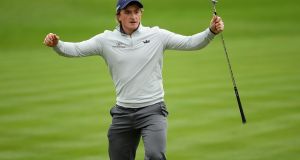 Alone he stands, which is a sign of Paul Dunne’s progress up the professional rankings but, also, an indicator of the decline of others.

No Shane Lowry. No Graeme McDowell. And, as the sole Irish player in the field for this week’s WGC-Mexico Championship in the rarefied air of Mexico City – a no-cut, $10 million event – the Greystones player, who qualified through his top-20 finish on last season’s European Tour order of merit, has an opportunity to claim valuable world ranking and Ryder Cup points.

In actual fact, just two Irish players – Dunne and Rory McIlroy – were exempt into the championship.

However, McIlroy, who disappointed over the final two rounds of the Honda Classic, has decided against travelling to Mexico, where he battled food poisoning for much of last year’s tournament, and will return to competitive duty at next week’s Valspar Championship.

McIlroy’s wind-down involves playing in the Seminole pro-members tournament with his father, Gerry, before getting down to work with coach Michael Bannon who is due to fly into Florida later this week to work on aspects of the player’s game.

It is not his putting which is occupying his mind. The focus for McIlroy will be on his iron and approach play, as those areas – again – were shown up at the Honda. In fact, he is ranked 168th in approach play on the PGA Tour this season having found 122 out of a possible 198 greens.

Dunne’s inclusion in the 64-man field for the WGC-Mexico Championship gives him a real opportunity to make his mark, in terms of world ranking – as he seeks to move up from his current world ranking of 86th, targeting a top-50 position in the week prior to the Masters if he is to get into that first Major of the year – and also to embellish Ryder Cup points standing.

Lightly raced so far this season, Dunne – who opened his year by playing in the EurAsia Cup in Malaysia and has since finished tied-19th in Abu Dhabi before missing cuts in Dubai and the Pebble Beach pro-am – is making his debut in the Mexico Championship.

In truth, it has been a slow and sluggish start for the Irish players on the PGA Tour this season, something which is reflected in the FedEx Cup standings: Graeme McDowell is 113th, Séamus Power is 118th, McIlroy is 172nd, Shane Lowry is 188th and Pádraig Harrington is 206th. As things stand, McIlroy is the only one exempt into the upcoming WGC-Dell Matchplay and also the US Masters.

Meanwhile, Tiger Woods has yet to announce where or if he will play before the US Masters, although the expectation is that he will add the Arnold Palmer Invitational at Bay Hill – where he has won eight times in his career – next month.

Woods – whose odds have tumbled ahead of the Masters, down to as low as 20/1 with some bookmakers – has improved from 1,199th in the world rankings prior to his comeback at last December’s Hero World Challenge to a current position of 389th.

“My new reality, my back’s fused and I can’t create the same shots I used to be able to create. I can hit the same shots but I just have to do it in a different way,” explained Woods of how he has had to adjust to compete.

Justin Thomas, claiming a seventh PGA Tour win in his last 31 starts, has maintained the momentum of his breakthrough Major-winning season of 2017 when he captured the PGA Championship.

Up to third in the latest world rankings, leapfrogging his close friend Jordan Spieth, Thomas acknowledged that the world number one spot is in his sights.

“It’s pretty well known that any top golfer, any golfer wants to be number one in the world. I think that would be kind of ludicrous to not be a goal, (for a) top-10, top-20 in the world player. But I just need to keep my head down and keep the gas pedal down and continue to work hard and continue to do the things that I’m doing in my off-weeks to give myself chances to win.”