Tiger Woods returning to ruthless self at Honda Classic 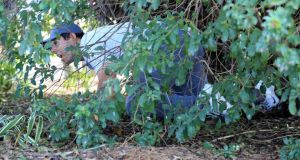 Rory McIlroy attempts to play a shot from the trees while on his knees on the sixth hole at the Honda Classic. Photo: David Cannon/Getty Images

Softly, softly the progress is being made.

There have been many Tiger Woods comebacks but there is no doubt that the current one looks by far the most promising. This one feels different. It’s slower and expectations are tempered. This is a Woods who plays practice rounds with fellow players, smiles and jokes and doesn’t say things like how he’s at a tournament for nothing less than a win.

After Friday’s 71 which left him four shots off the lead going into the weekend Woods began to change his tune. The gameface was back and the glint was in the eyes.

On Saturday he backed up those words and could well have been right in the mix going into Sunday had it not been for a couple of putts refusing to drop and the dreaded Bear Trap – the 15th, 16th and 17th holes at PGA National – again causing him problems.

Despite that, this was Woods’ most impressive round since returning to competitive golf in the Bahamas last December and some of the most promising golf seen since his last win five years ago at the WGC Bridgestone Invitational.

And he was typically bullish after the round, already plotting how he could make a charge and possibly win for the first time at the Jack Nicklaus-designed course.

On another tough day at the brutally difficult in Palm Beach Gardens, Woods looked very much in control as he shot a third round 69, one under par, to go into Sunday on level par and seven off the lead held by Luke List with Webb Simpson and Justin Thomas the nearest challengers at six under.

In the Bahamas, at Torrey Pines and last week at Riviera the driver had been the problem for Woods with many of his tee shots flying off the charts. Not so on Saturday in Florida. Woods hit nine out of 14 fairways.

Last week the 79-time PGA Tour winner spoke of how he “built his career on being pin high” but couldn’t get his distances dialled in for his approach shots. On Saturday he hit 14 greens in regulation and was consistently in line with the flag.

It was no surprise that after the round Woods described his 69 as “probably the highest score I could have shot today.”

Despite a number of chances for birdie in his opening seven consecutive pars, Woods didn’t pick up a shot until the eighth and will rue not making the most of at least one of four approaches within 20 feet at the ninth, 10th and 11th. However, the putter did get going at the 12th when, after finding a fairway bunker with his drive and splashing out to 100 yards short of the green, he fired his third shot in to 16 feet and sunk the putt for a fist-pumping par save.

That gave him the momentum to birdie the 13th after yet another perfectly judged wedge shot into the green. However, the Par 3 15th – which Woods double bogeyed on Friday – again proved to be his nemises after hooking his tee shot way left and leaving a virtually impossible up-and-down over the greenside bunker. A bogey there and another bogey at the Par 3 17th due to a very similar hook off the tee stunted Woods’ progress up the leaderboard. However, he at least salvaged one of the dropped shots at the final hole after a sublime bump-and-run from just off the green at the Par 5 left a tap in birdie.

For Rory McIlroy it was an adventurous and altogether very disappointing Saturday as he played himself right out of contention with a nightmare front nine. Starting the day at four over par the former Honda Classic champion knew he needed to go low but any chances of that were dead in the water after he went bogey, bogey, double bogey, bogey, bogey from the fourth to the eighth which included a close shave with a dip in the alligator-infested waters and a Seve-like brush with a tree.

McIlroy’s tee shot at the Par 3 fifth barely cleared the water, leaving him standing precariously on the rocks to play his chip shot. After jabbing it 30 feet past he almost lost his balance and fell back into the lake but managed to save himself.

But the drama wasn’t over.

Two holes later his approach flew the green at the Par 4 sixth, scuttling right in underneath a tree. From there McIlroy got down on his knees and attempted to poke a shot out but couldn’t channel his inner-Ballesteros, eventually winding up with a double bogey six. While he did restore some respectability with four birdies in his last 10 holes to sign for a round of 73 and a total of seven over par, there still looks to be plenty for the four-time major winner to work on if his game is going to be in peak shape heading into Augusta.

In his first eight holes McIlroy had four approach shots from inside 120 yards and missed the green altogether with three of them. At the second he found the bunker left, at the fourth he overshot the green, at the eighth he found the bunker on the right and at the third – the only putting surface he managed to find in those four approach shots – he was left with 40 feet for birdie.

At the ninth he did eventually manage to dial in his distances to record a first birdie of the day and followed it up with three more at the 10th, 14th and 17th. But there’s no doubt there’s still work to be done despite his long off-season layoff and some good form in Dubai and Abu Dhabi.

It wasn’t much better for Shane Lowry who managed just one birdie in his round of 75 which also included four bogeys and a double to leave him at 10 over par and in a tie for last place.

1 Ireland's centre will hold thanks to Henshaw and Aki’s midfield muscle memory
2 Liverpool maintain perfect start but count cost with Fabinho injury
3 Cian Healy: ‘Realistically I got away with murder when I was younger’
4 Robbie Henshaw likely to be the only Irish change for France finale
5 Bartomeu resigns and drops bombshell of Barcelona joining European Super League
Real news has value SUBSCRIBE