Different Strokes: Paul Lawrie is not afraid to name names 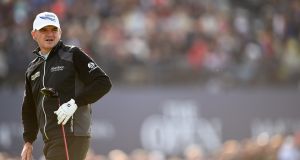 If only everyone was as honest as Paul Lawrie, the former British Open champion who is one of the few players not afraid to name names when it comes to the issue of slow play, which is a plague on all our golfing houses.

Lawrie took to social media after again enduring golf at a snail’s pace during the Qatar Masters and, unlike others who tend to moan in private, showed admirable honesty in hitting out at the culprit . . . namely Aaron Rai, the young Englishman in his rookie season on the PGA European Tour.

“Getting pretty fed up playing with guys who cheat the system by playing as slow as they want until referee comes then hit it on the run to make sure they don’t get penalised then as soon as ref gone its back to taking forever again. We need a better system,” vented Lawrie, a no-nonsense Scot who doesn’t hide behind anyone.

Name the names, he was asked by respondents. And he did. “Aaron Rai this week (in Qatar) Max Keiffer last week (in Oman),” replied Lawrie, but – aware that the issue is greater than simply naming names – added: “Naming and shaming isn’t going to make golf quicker, though we need a system which is affordable and makes players hit shots in their time allowed and if they don’t it must be a penalty shot every time.”

The slow play issue of course isn’t just confined to the European Tour – who at least seem interested in tackling the problem, even to the extent of trialling a shot clock on tour this season in the 2018 Shot Clock Masters in Austria – and, if anything, it is even worse on the PGA Tour.

The latest example – following on from painfully slow performances from the likes of JB Holmes and Kevin Na in recent weeks – came during the final round of the Honda Classic, where Sky Sports’ on-course commentator Wayne “Radar” Riley lost the plot with the slow antics of former US Open champion Webb Simpson.

“Watch Webb Simpson? I’d rather stick needles in my eyes,” said an exasperated Riley at one point of the back nine, with no sight nor sound of any PGA Tour referee to keep Simpson in check. And as if to prove Lawrie’s point, Simpson did speed up (briefly!) when a referee finally arrived, only to revert to form as soon as the official (job done!) had left.

“I look at pictures of myself and I don’t feel like I look like that person,” remarked Jessica Korda, following her victory – the fifth of her LPGA Tour career – in the Honda LPGA Thailand championship.

Indeed, her sister Nelly – also an LPGA Tour player – had gone to the trouble of warning other tour players that her sister looked different, having undergone major surgery last December.

Jessica marked her return to the competitive action with a standout victory in Thailand, one made all the more remarkable for the fact that she still gets headaches and has a numbness in her face following the reconstructive surgery to correct a severe overbite: her jaw was broken in three places at the top and twice in the bottom and she had 27 screws inserted to hold her face together. Surgeons also broke her nose to get the breathing tube in and, for weeks after, her mother Regina fed her through a syringe.

The daughter of Czech-born former Australian Open tennis champion Petr Korda, Jessica – born and bred in the US – made a stunning return to competition in Thailand with a four-stroke winning margin over her closest pursuers. “Coming in after surgery, I didn’t know what to expect. I didn’t know how I was going to be received . . . this is my fifth title. Every one is special, but this one is really, really cool.”

The Korda sisters are in action again this week on the LPGA Tour, competing in the HSBC World Championship in Singapore.

The clubhead speed recorded by Tiger Woods – clearly fully fit again – during the final round of the Honda Classic, a statistic that would lead the PGA Tour every year since they started taking records in 2007.

“Who said that? Who was cheering for that ball to get in the bunker? Was that you? You’re done, buddy, you’re gone” – Justin Thomas, eventual winner of the Honda Classic, identifying a spectator who had urged his drive on the 16th in regulation to finish in a sand trap. A bit thin-skinned perhaps. Wonder how he’ll handle the language thrown in his direction at the Ryder Cup in Paris . . .

“Just caught up with the football scores from yesterday. My hangover is bad, but even keeled over the toilet I’m managing to still find the presence of mind to remind myself it could be worse; I could be an Arsenal fan” – Eddie Pepperell, never stuck for a word or two or three.

“Pumped to wake up this morning and see @Thejessicakorda back in the winners circle! So happy for her after a tough year of injuries. Congrats Jess!” – Justin Thomas got his inspiration from JK, after finding out his friend had won on her return to the LPGA Tour.

“Yes tiger had a pretty good round of golf (Sunday) but please don’t miss the fact that @Samburns66 just played a brutal golf course in a bogey free 68 playing with Tigs. Kid is a stud and only gonna get better” – PGA Tour player Steve Wheatcroft tips the cap to the 21-year-old Burns, who made use of a sponsor’s invitation to secure a top-10 finish at the Honda Classic.

In stroke play, a competitor is searching for his ball under a tree. He accidentally moves his ball with his foot in breach of Rule 18-2 and, at the same time, breaks a branch, improving the area of his intended swing in breach of Rule 13-2. What is the ruling?

The competitor has breached two Rules as a result of a single act. In accordance with the second principle in Decision 1-4/12, the competitor only incurs a single penalty. However, in this case, the Rules that have been breached by the competitor give different penalties (ie Rule 18-2 carries a one stroke penalty and Rule 13-2 carries a two stroke penalty). In such circumstances, in equity (Rule 1-4), the more severe of the two penalties must be applied and, therefore, the competitor is penalised two strokes under Rule 13-2. If the same circumstances arose in match play, the player would lose the hole for the breach of Rule 13-2.