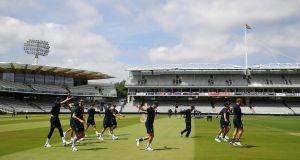 The England team warm up ahead of the Test match against Ireland at Lord’s. Photo: Julian Finney/Getty Images

It’s a wonder the Irish are so well known for their hospitality when you consider the state of some of the people they have to welcome. The very same day play got under way in the 148th Open the papers here led with the Boris Johnson line, first reported in the Financial Times, about Leo Varadkar, “why isn’t he called Murphy like all the rest of them?” Add it to the list, along with Iain Duncan Smith’s blithe dismissal of “this Irish stuff”, Karen Bradley’s blunt admission of her own ignorance of the difference between unionists and nationalists, Priti Patel’s bright idea to leverage the threat of food shortages in the Brexit negotiations, and countless others.

“What kills you is the ignorance,” the Irish journalist Megan Nolan wrote in The Irish Times last October, about her experience of living in England for three years. “What grinds you down is how much they don’t know about the past and, if they do know, how little they care.”

In the Guardian, Ireland’s former ambassador to the UK, Bobby McDonagh, couched it in more diplomatic language. “A large swathe of opinion in London, although of course by no means everyone, has come to misunderstand seven major aspects of Ireland: our motivation, allegiance, influence, intelligence, resolve, politics and friendship.” Pottering around Portrush last week was a short, quick and incomplete reminder of all this English obliviousness.

“Why didn’t you ever tell me how beautiful Portrush is when the sun’s out?” I asked a friend who spent all his young summers here.

The Irish did. They spent years pestering the R&A to try to persuade them to bring the Open back here. In the end it almost got to be a running joke. Every Open starts with a press conference held by the R&A’s chief executive and one of the Irish journalists would always make a point of asking whether they had any plans to bring the championship back here for the first time in 51, 52, 53 years and counting. And the R&A’s chief executive, Peter Dawson, would always find some new way to fob them off, usually something about the political climate, or the security risks, or the infrastructure concerns, or the commercial needs.

Then Padraig Harrington won the Open at Carnoustie in 2007 and again at Royal Birkdale a year later. And Graeme McDowell won at Pebble Beach in 2010. And Darren Clarke won at Royal St George’s in 2011. And some young, mop-haired kid called Rory McIlroy cleaned up at Congressional in 2011 and Kiawah Island in 2012 and Royal Liverpool and Valhalla in 2014. There are no borders in Irish golf and they all counted as Irish victories. And in the middle of McIlroy’s run Dawson finally relented and made the announcement that the R&A were going to bring the Open back to Portrush after all.

By then the Irish weren’t asking for the Open but demanding it. Their success has defined this era of the championship. Between them they have won it as many times in the past 12 years as the English have in the previous 68. And it’s an Open secret that their four major champions – Harrington, McDowell, Clarke and McIlroy – spent a lot of time lobbying the R&A to bring it here. “Gentle ribbing,” McDowell called it. The R&A still waited to see whether or not Portrush would do a good job of hosting the Irish Open in 2012, when, in the end, so many people turned up that they broke the attendance record for the European Tour.

Well, on Wednesday morning, right around the time that some of the heavier hangovers from Sunday night celebrating the latest Irish major winner may just be beginning to lift, there will be another milestone in sporting relations between the two nations. Ireland are playing their very first Test match against England – and at Lord’s, too, the home of the MCC, one of the few institutions as patrician as the R&A. The Irish have been waiting a long time for this one, too, and, while they were, the English were very happy to take advantage of them by recruiting their best players into our own team. It wasn’t just Eoin Morgan but Boyd Rankin, who they abandoned after a single Test, and Ed Joyce, who didn’t even get that many.

Here, too, the Irish had to batter the door down just to get the English to answer it. The ECB started giving the Irish regular games only because they were spooked into it when the Irish got India and South Africa to come over and play in a tri-series in 2007. After that the ECB decided to throw the Irish the odd fixture to keep them sweet and make sure there weren’t any more scheduling clashes with their own matches. And then the Irish went and beat them at the 2011 World Cup.

Seven years later, they are finally going to play a Test except – except – the ECB, in its wisdom, has decided this landmark match would be the right time to trial a new, four-day format of the sport. Now the game may not have lasted five days anyway, few do, but it still feels like a snub.

“It’s our greatest test at the greatest ground,” the Irish player Andy Balbirnie said, and here are the English making them play guinea pigs in it because God forbid the Irish should just get to play a regular Test, same as anyone else. It wasn’t meant as an insult, it never is, but it smacks of what Nolan described as the English’s “mix of dismissal and casual disdain”. Maybe if the Irish win this one we’ll finally let them play a five-day game. – Guardian