British Open could return to Royal Portrush as early as 2024 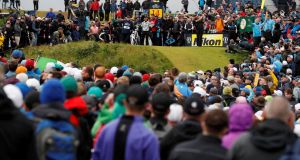 Shane Lowry plays his tee shot on the 14th hole during the final round of the British Open at Royal Portrush. Photograph: Paul Childs/Reuters

Why wait? After the great success of the 148th British Open at Royal Portrush, where the total of 237,750 spectators through the week was the second largest in the event’s history, and corporate hospitality reached new levels in sales, the timeline for a return could be moved forward by as much as five years, with the possibility of a return as soon as 2024.

With the R&A committed to making the championship one of the most prized tickets in sport, the unprecedented sell-out signs at Portrush on championship days – with only St Andrews in 2000 drawing a larger attendance – could well push the north Antrim venue ahead of others on the rota in securing an earlier return date.

Next year’s championship will be staged at Royal St George’s in Kent – where, following on from Portrush – ticket sales have reached record demands with more than 50 per cent already sold a year in advance; while the 150th edition of the championship will see it return in 2021 to its spiritual home on the Old Course at St Andrews.

The R&A has driven forward in its policy to make the British Open among the biggest attended sporting events globally. As Martin Slumbers, the chief executive, explained: “Big-time sport needs big-time crowds . . . [and] the Open is going from strength to strength. It’s very much a global celebration of sport at the very highest level and no longer simply a British championship. That’s very important to us because the Open is where we generate the income to be able to support the game and invest our commitment of £200 million (€222.5 million) into the sport over the next decade.”

And Johnnie Cole-Hamilton, the executive director championships at the R&A, admitted that they were “moving into a new era” with the championship’s growth in attendances with this latest staging at Portrush proving to be an unqualified commercial success.

The initial commitment from the R&A in bringing the British Open to Royal Portrush was for three over a 30-year period but the goalposts have been well and truly moved and it is expected that club member s will be engaged in a process to make for a quicker than scheduled return.

The course stood up extremely well, with an average score of 72.175, with Shane Lowry’s 63 in Saturday’s third round and David Duval’s 91, including a 14 on the seventh hole, in the opening round the low and high rounds respectively.

As for the man of the moment? Lowry’s celebrations took him to Dublin on Sunday night and a few watering holes around the city and, speaking to Paddy Power News as the firm’s golf ambassador, the champion said: “I suppose I still can’t believe it. I lay in bed this morning and I had the Claret Jug there and it was just an incredible feeling. It’s still a bit surreal to be honest, a dream come true. Obviously, it’s taken a lot more than luck to get me here but I feel lucky that it’s happened to me.”

Lowry also revealed he’d put his phone aside for much of the day. “Over the coming days I’ll probably have a better sense of what it’s actually been like but I was speaking to a few people who were in Croke Park for example and they were telling me the scores were being announced over the system, which is wild. Anybody that knows me knows I’m the biggest GAA man you’ll find, so for that to happen is mad.”

Originally scheduled to play in this week’s WGC-St Jude Invitational in Memphis this week, Lowry took the decision to give the tournament a miss and will return to action next week in the Wyndham Championship in North Carolina ahead of the FedEx Cup playoffs.

Lowry’s win in the British Open saw him move to the top of the Race to Dubai order of merit on the European Tour and to 18th (an improvement of 50 places) on the FedEx Cup rankings.

Rory McIlroy returns to action following his missed cut in Portrush at the St Jude Invitational, while Séamus Power – battling to retain his tour card – and Pádraig Harrington are playing in the Barracuda Championship in Reno.