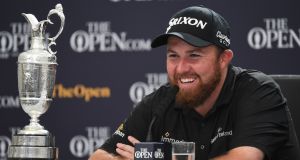 “It was not the largest crowd the Open has ever had – there was one bigger, at St Andrews in 2000 – but it was surely the loudest. But then they have been waiting for this a long time. This was the first time they have had the Open here in 68 years. It would have come sooner, but for the Troubles. And without stretching the point, it felt significant that the Open ended with all those Northern Irish fans cheering on a golfer from Offaly, the son of an All-Ireland title-winning Gaelic footballer, no less.

“It was Irish tricolours that were being waved all around the course, rather than the crown and red hand on the flag of Northern Ireland. There were times, and there still are places, where that could provoke a riot. But not this day. And not here. That’s what’s so brilliant about sport. It can unify rather than divide.”

“They say it was a bit loud at Royal Portrush when Shane Lowry rolled in his last putt to clinch the 148th Open Championship, but you had to be in the Esker Hills clubhouse to know what loud really meant. There, the volume was turned up to 11 with an ear-splitting, foundation-shaking, roof-raising roar that marked the magical moment when their most famous son won golf’s oldest and most prestigious prize.”

“The Open crowd are a hardy bunch. It had been raining for most of the championship, but the deluge shortly after 3pm yesterday was next level. Instead of running for cover, however, hundreds of spectators danced an Irish jig near one of the main enclosures. The bouncing brollies were some spectacle.”

“As the thunderous support on Saturday and Sunday made clear, this was a unifying moment for the Irish even if the locals would surely have found a victory by a Northern Irish star like Rory McIlroy or McDowell to be the perfect ending. Still, it was quite a symbolic finish and quite a breakthrough moment for Lowry, whose talent has been widely apparent since he won the Irish Open as an amateur in similarly nasty weather in 2009.”

“The first Irishman to win an Open Championship on the Emerald Isle, they serenaded him down the 18th to a howl of ‘oles’ that even the winds couldn’t subdue. After 68 years without an Open here, the script could barely have worn a more romantic ending as the 32-year-old banished the demons of squandering a lead by the same margin going into the final round of the US Open three years ago.”

“He smiled from here to Clara, his town in County Offaly four driving hours south across the blessedly soft border. A man with a full-on beard lived his childhood daydream, and golf had wrung from him a happiness only a wretch could begrudge.”