Brian ‘Bo’ Martin ‘was great at keeping me in the moment today. He’s been great for me’ 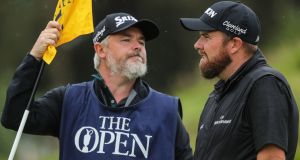 Shane Lowry with his caddy Brian Martin. “Bo has been incredible the last year. He’s brought a new lease of life to me. He is so thrilled. He was unbelievable today.” Photograph: Oisín Keniry/Inpho

Ten months ago Brian ‘Bo’ Martin met Shane Lowry for a coffee in Dublin and agreed to caddie for him in the Portugal Masters, a tournament in which the 32-year-old Clara native finished sixth.

On Sunday night at Royal Portrush, Lowry was crowned the British Open champion, and paid tribute to the man who walked by his side and who, apart from discharging the toting duties, made him laugh and kept him sane when the pressure was at its zenith.

Lowry admitted: “Bo has been incredible the last year. He’s brought a new lease of life to me. He is so thrilled. He was unbelievable today. He kept on my back all day, kept talking to me, he kept in my ear. I kept on telling him how nervous I was, how scared I was, how much I didn’t want to mess it up.

“All I could think about was walking down 18 with a four- or five-shot lead. And lucky I got to do that. He was great at keeping me in the moment today. He’s been great for me. Obviously we formed a great relationship and it was amazing for him today. I’ve known Bo a long time. He’s now become a very good friend of mine. And to be able to share it with someone so close was very special.

“It was Neil [Manchip] phoned me on whatever day it was and said the job was coming up and ‘are you interested?’ I was actually doing something else outside of golf. I was trying to get back into the real world.

“I met Shane for a coffee and some breakfast in Dublin and said, ‘sure look we’ll do Portugal and see how it goes’. We finished sixth there. We kept going and after three or four weeks I was like, ‘this guy’s a really good player’.

The 46-year-old Martin, who recently celebrated the birth of his first child, Beau, had worked a succession of bags including Gary Murphy, Peter Lawrie, Alex Levy and Lucan Bjerregaard and is noted for his chilled laid back presence,.

A scratch golfer out of Ardglass, twice a club champion and a former Boys international, his priority during yesterday’s final round was to ensure Lowry played every shot on its merit.

“We knew what we had to do. We said on 14 ‘let’s finish with four pars’. It doesn’t matter what the score is; that’s all you can do. You can’t think, ‘we’ve got a five shot lead I have got to do this; you have to do the right things, make the right choices, go through the right processes and slow it down.

“We slowed down after 13, your mind does race a little bit. Tommy obviously hit a great shot into 12. I had no idea [at that point] how many shots we were ahead. I think Shane three putted 11 and probably spooked himself a little bit but it didn’t matter.

“I looked at the board and Justin Rose was six over par and JB [Holmes] was 10 over par. I was just trying to keep it as normal as possible.”

Three years ago Lowry took a four shot lead into the final round at Oakmont and finished in a tie for second but Martin asserted that it was his experience when enjoying a similar advantage in Abu Dhabi earlier this year when Lowry won that was the more important life lesson.

“It [losing out in Oakmont] wasn’t critical [to this success] but it obviously helped a little. I think the experience in Abu Dhabi was better because we had a four shot lead and were three behind after 10 holes. Then he’s thinking about Oakmont. It was great that we have those experiences. It’s good to know that you can have a four shot lead and still win.”

Martin explained that the pair allowed themselves a chuckle from time to time as they marvelled at the support Lowry received.

“We were just laughing, ‘how mental is this?’ What are these people like, they’re crazy. We were on the eighth and said ‘can you imagine standing in this rain and watching us playing golf. There is no chance I would be here; fair play to them.”

So what did he say as the pair shared a hug on the 18th fairway?

“Just stand there, have a look around and enjoy this. We enjoyed it going down 17. In fact going down 17 [on Saturday] he said to me, ‘let’s enjoy the next 30 minutes’. And that was Saturday. It was awesome. Then we did the same again today. He said the exact same thing.”

1 Rory McIlroy puts integrity ahead of glory in US PGA second round
2 Frustration for Lowry and McIlroy as Li leads at US PGA
3 From Maestro to Mister: Andrea Pirlo named new Juventus boss
4 Serena Williams ready for a socially distanced US Open
5 Michael Walker: Pressure mounts on Barcelona to stop slide
Real news has value SUBSCRIBE

Andy Sullivan on course for first tournament win since 2015 19:56
From Maestro to Mister: Andrea Pirlo named new Juventus boss 19:40
Buttler and Woakes drag England from the brink to set up thrilling Pakistan win 19:30
Waterford draw blank against Cork as second Covid-19 test returns nagative 19:17
Serena Williams ready for a socially distanced US Open 18:22
Here is your handy guide to sport on television this week