The biggest win of his career has moved him to 17th, which equals his best-ever ranking 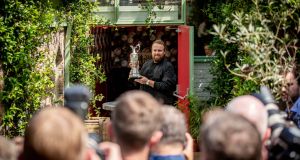 Shane Lowry at a media conference in Dublin on Tuesday. Photo: Morgan Treacy/Inpho

Shane Lowry has put qualifying for next year’s Ryder Cup at Whistling Straits down as his primary target going forward for the next year; Pádraig Harrington, the European captain, has ear-marked the new holder of the Claret Jug as a man he wants on his team. It seems like a match made in heaven, doesn’t it?

That qualifying campaign doesn’t kick off until the BMW PGA Championship at Wentworth in September and, in a somewhat neat synergy, the process will conclude 12 months later at the same tournament: four players will make it by right through points earned in Race to Dubai-counting events, while five players will qualify off the world points list over the same period.

For Lowry, that goal of making Harrington’s team for the match in Whistling Straits, Wisconsin, would seem even more attainable given his new stature as a Major champion. And although Harrington has three captain’s picks, Lowry’s determination to make it off his own steam is a quality that appeals: “It is likely to be windy, tough conditions (in Wisconsin). Shane is a strong player, obviously he can handle the pressure,” said Harrington of the qualities he would bring to the team.

The Dubliner added: “He’s a big-time player, when he gets up there, he has the belief and confidence . . . he has proved he can win on big, big occasions. He proves he can handle the pressure. This isn’t a catalyst, this is it. You shouldn’t think of this as a stepping stone , you should think of this as where he is. I don’t think too many players in the game of golf would relish playing against him in the final rounds.

Graeme McDowell – a vice-captain in Paris last year – observed how Lowry had turned matters on their head in a year, transforming the despair of Carnoustie a year ago into the joy of Portrush: “This is a game of confidence. When you are not playing well, you can get the confidence knocked out of you very quickly in this sport, especially on the PGA Tour (where Lowry lost his card last season). I think he came back from the States and he remembered who he was again. He won in Abu Dhabi and he has been Shane Lowry again.

“When I look back, losing his card in the States last year was the best thing that could have ever happened to him because it gave him that little kick you need to refocus and remotivate and get himself where he wanted to be.”

Lowry’s upward trajectory in the world rankings this year are revealing. He was ranked 75th at the end of 2018, and his win in Abu Dhabi jumped him to 41st and this biggest win of his career has moved him to 17th, which equals his best-ever ranking.

I didn’t sleep very well. I slept for about four or five hours, and I normally throw a good eight, 10 hours at it”

– Shane Lowry on his trouble sleeping on the four-stroke lead on Saturday night ahead of his final round.

The key statistic in Shane Lowry’s march to the Claret Jug was his greens-in-regulation, where he topped the field with a 79 per cent rate over the championship. Francesco Molinari was next best with 78 per cent. Runner-up Tommy Fleetwood was 13th in the category with a 69 per cent rate.

“Even though last week wasn’t the week I had envisaged for myself, I couldn’t be happier and more proud of @shanelowrygolf How he handled everything over the weekend…. emotions, nerves and conditions tells you everything I’ve gotten to know about him over the past 15 years. 2019 Champion Golfer of the Year! Enjoys some good stuff out of the Claret Jug!”

– Rory McIlroy, who played on the same Ireland team through boys’ up to the won the European Championships back in 2007, pays tribute to Lowry.

– None other than 18-times Major champion Jack Nicklaus tipping his cap to Lowry, and throwing in the cúpla focal for good measure.

“There isn’t many better people out on tour than @ShaneLowryGolf! Couldn’t have happened to a nicer bloke, everything about him and his family is just wonderful! Congrats mate!”

“Unbelievable golf from @ShaneLowryGolf this week at an unreal venue! Couldn’t think kof a more deserving champion a true Irish hero and even nicer fella #COYBIG”

Chance for Clarke to bounce back

A triple-bogey on the 18th in his second round ruined Darren Clarke’s home-coming in the British Open at Portrush, where he missed the cut by a shot, but the Northern Irishman gets the chance to bounce back in another Major –this time the Senior British Open – at Lytham and St Annes this week.

The 50-year-old is making his debut in the championship on a links where he finished third behind David Duval in the 2001 British Open, and is still seeking a first win on the seniors circuit.

Paul McGinley will escape from the Sky Sports commentary booth to make a rare competitive appearance this season, while Des Smyth and Mark McNulty are also in the field.

Q Player A’s chip onto the green finished little more than 30cm from the pin. In finishing out, he removes the flagstick with one hand and holds it while putting out with the other hand. Is this permissible?

A Yes, under Rule 13.2b(1)/2, a player can make a one-handed stroke while holding the flagstick with the other hand so long as he does not use the flagstick to steady himself or herself while doing so.

1 Tipping Point: DeChambeau’s transformation raises questions, but who will ask them?
2 UK Sport to investigate ‘deeply troubling’ allegations of abuse in gymnastics
3 Tuilagi case shows England’s home-based clause is out of date
4 The Game Changers: Vincent O’Brien, a pioneer who took Irish racing to the world
5 The unsolved mystery of Goran Ivanisevic’s stunning Wimbledon win
Real news has value SUBSCRIBE