Shane Lowry and his sporting family: when GAA meets golf 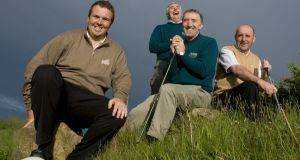 The Lowrys from Ferbane are one of the great Gaelic football families - Shane’s father Brendan and uncles Seán and Mick won All-Ireland medals with Offaly in 1982.

That famous Offaly team stopped Kerry from completing the five in a row, the Kingdom were the last football team since this year’s Dublin side to win four titles consecutively and go after an historic fifth.

Shane’s father Brendan scored 0-3 in that final, the pinnacle of almost 15 years playing with the Faithful county’s senior footballers, which also saw him win an All Star award as the best left corner forward in the country in 1981.

That year Offaly lost the All-Ireland final to Kerry, with Brendan and the team having an off day. Much like his son Shane, in the US Open 35 years later, he would have to lose one to learn how to win it. Shane went into the final round at Oakmont in 2016 leading by four shots but missed out on his first Major after a 76 on the Sunday.

Three years later at Portrush, and he wouldn’t make the same mistake again. In the 1982 decider Brendan - a skilful attacker and reliable scorer - had his brothers Sean and Mick on the team as he too got over the line the second time of asking.

Seán had been playing both as a forward and defender for Offaly for 10 years at this stage, and 1982 was his third time to lift Sam Maguire. A powerfully built player, he wore the number six jersey in 1982. He also won two All Star awards - at full-forward in 1979 and centre back in 1982 - before going on to win a Connacht championship after moving to Mayo. The eldest of the trio, he had the ball in his hands when the final whistle was blown in Croke Park 37 years ago.

Mick lined out at corner back for Offaly on that famous day against Kerry, a clever and consistent defender he played for the county until 1991. The three brothers also had great success with their club Ferbane, winning a Leinster club title in 1986 and five county championships in a row.

“I was always a bit too slow for the big ball,” Shane told reporters in Portrush on Sunday. “ I knew where the goals were, but I was never good enough. Like, I played football growing up, and football was obviously huge in my house. It was everything where I was from, the town we grew up in. I was in school, 500 kids, and I was the only person that played golf. That’s kind of where we came from.

“I think the win is huge for Irish golf. I think it’s big for Irish sport. I’m a huge sports fan. People know that. People in Ireland know that. I’m a big GAA man. I think it’s a very tight-knit community and I think those people will [appreciate the win]). I’d say people watched golf today that never watched golf before, that’s probably how I’d say it.”

Since 1982 Offaly have won only one Leinster title in football - that was in 1997 and they’ve only reached one final in the 22 years thereafter. But with their footballers currently competing in Division Three, and their hurlers relegated to the third tier of the championship - the Christy Ring Cup - at least the Lowry family is still producing the goods. And now the whole world is watching.