Shane Lowry leads celebrations and belts out Fields of Athenry

Irish golfer Shane Lowry celebrates his British Open win at Royal Portrush with a rousing rendition of The Fields of Athenry during a pub sing-song. 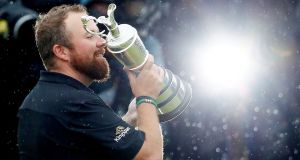 Freshly crowned British Open champion Shane Lowry is a man of his word. He said he intended to heartily celebrate Sunday’s six-shot win at Portrush and, sure enough, video footage has emerged of the Offalyman, with his friends and family, belting out the Fields of Athenry.

Caddie Brian ‘Bo’ Martin is prominent among the revellers. The venue is Dublin’s 37 Dawson Street where Lowry and his entourage decamped to late on Sunday night.

Lowry has cancelled plans to play in this week’s WGC-St Jude Invitational in Memphis, US, so that he can stay at home to celebrate his victory.