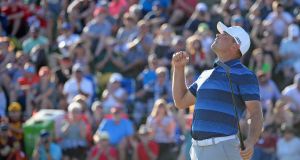 Gary Woodland celebrates after making a par to beat Chez Reavie in a playoff during the final round of the Waste Management Phoenix Open at TPC Scottsdale. Photo: Robert Laberge/Getty Images

American Gary Woodland parred the first extra hole to beat compatriot Chez Reavie in a Phoenix Open sudden-death playoff on Sunday as two of the lesser-known players on the PGA Tour battled for victory after the big names fluffed their lines.

Woodland needed two putts from the fringe at the par-four 18th to clinch victory after Reavie missed a 10-foot par putt at TPC Scottsdale in Arizona.

Earlier, Woodland carded a closing 64 to set the pace on 18-under-par 266, a total that was only matched by Reavie when he birdied the last to sign for a 66.

For Shane Lowry it was a disappointing final round as he added a 71 to Saturday’s 74 to finish at two over par and well down the leaderboard in a tie for 65th.

Overnight leader Rickie Fowler faded with a 73 to tie for 11th, while Jon Rahm and Phil Mickelson, who like Reavie both played college golf in Arizona, also came up short in front of another raucous crowd at the biggest party on the PGA Tour.

The long-hitting Woodland credited his victory to an improved short game.

“I put a lot of work in this off-season. Short game needed some adjustment,” the 33-year-old said after clinching his third victory in 207 starts on the PGA Tour. “We’re just building. I’ve still got some work to do but I’m excited where we’re at.”

Fowler’s collapse, meanwhile, hardly dispelled his reputation as a player renowned for struggling to close out the deal, having now converted only one of six 54-hole leads on the PGA Tour into a victory.

The popular American was still in contention until late in the round, before three consecutive bogeys from the 15th ended his challenge.

Rahm started the final round one stroke off the lead but never quite recovered from a bogey at the first, shooting 72 to sit alongside Fowler at 12-under.

The Spanish world number two won the CareerBuilder Challenge two weeks ago but Sunday marked the second straight week that he has failed to deliver in the final round when sitting near the top of the leaderboard.

Mickelson, meanwhile, remains winless since the 2013 British Open. The five-times major winner made a late challenge with three successive birdies from the 15th, but a double-bogey at the last condemned him to a tie for fifth on 14-under.

1 Séamus Power rockets into share of clubhouse lead in Detroit
2 Red Bull poised to protest over Mercedes’ new steering system
3 The Best of Times: Ireland’s Golden Generation make Grand Slam history in 2009
4 Billy Morton’s Santry Stadium a beacon for sporting endeavour
5 Monica Seles: The warrior queen who could have been the best ever
Real news has value SUBSCRIBE