Different Strokes: Jin Young Ko clubs together to buy a house in Texas 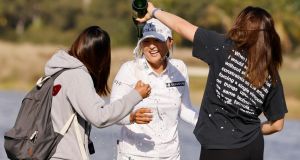 Jin Young Ko’s all-white outfits may set her out from the crowd, but the world number one – who capped off a limited-schedule LPGA Tour season with victory in the Tour Championship – stands apart for another reason: that she doesn’t have an equipment deal.

While the South Korean is one of the biggest draws in the sport, the two-time Major champion has sought to keep matters so that she can put whatever clubs she likes in her bag: “I like the freedom to chose what’s best for me . . . [to give] me peace of mind, also [to] satisfy my standards in terms of technical results.”

The upshot is that Ko has a mishmash of different clubs: she has Callaway driver, 3-wood and 5-wood, a Titleist hybrid, Bridgestone irons, Ping wedges and a TaylorMade putter and Titleist ball in her armoury of equipment.

Ko only played four tournaments on the LPGA Tour this season after opting to remain in her homeland due to the coronavirus pandemic but showcased her brilliance with a win in the season-ending Tour Championship which netted her a $1.1 million (€900,000) payday which she aims to use to buy a house in Texas: “I had no money in my bank account [to buy] because I send to Korea all my money,” she joked of why it had taken so long to find an American base.

While Ko’s limited appearances in the US this year meant she failed to meet the minimum criteria of tournaments in the player of the year awards, that title went to compatriot and world number two Sei Young Kim while the Vare Trophy for stroke average went to American Danielle Kang.

In any other season, Leona Maguire’s efforts would have netted her the rookie of the year award – won by Jeongeun Lee6 in 2019 and actually by Jin Young Ko in 2018 – but the decision was made not to award the rookie award in 2020 due to the reduced schedule. Maguire incidentally will be eligible to compete for that rookie award again next year.

It nevertheless proved to be a hugely successful maiden season on the LPGA Tour for Maguire, who finished 65th on the money list with prizemoney of $180,387 (€147,650) while Stephanie Meadow too can reflect on a good season after finishing 55th and with tournament earnings of $222,733 (€182,330).

The LPGA Tour’s 2021 season will be significantly enhanced, with 34 tournaments featuring prize money of $76 million (€62.2 million).

Home comforts pay off for Westwood

You could say he ripens like a fine wine, but there is more to Lee Westwood’s golfing longevity than the 47-year-old’s age: in adding the European Tour’s golfer of the year accolade to his recent win in the Race to Dubai, the Englishman’s loyalty to his home tour has been rewarded.

After the tour took tentative steps back to tournament play after the mid-year stoppage caused by the pandemic, Westwood took the decision to remain for the most part on the European Tour rather than heading Stateside.

The upshot was that he hosted and played in the British Masters, one of nine events that he played in on the European circuit and limited his transatlantic hopping to just four events which included two Majors, the US Open and the US Masters.

Through the season, Westwood included a win in Abu Dhabi and showed tremendous consistency in missing only one cut in 15 outings on the European Tour: “I’m honoured and extremely flattered,” said Westwood of his fourth Player of the Year award. “I never forget that I am fortunate to do a job which I love, and which has sent me around the world playing in the most amazing places and meeting some wonderful people . . . . to win this award is very humbling.”

“It helps to have the world No 3 as a partner, but I think we ham and egged it really well” – Mike Thomas on teaming-up with son Justin to win the PNC Challenge. The father-son partnership had 10 birdies in their opening 11 holes of the final round to shoot a 15-under-par 57 in the scramble format and pip the Singhs, Vijay and Qass, by a stroke.

Congrats to @DubGAAOfficial – very worthy winners again. What more can be said? Not alone are they a very talented squad of players but they’re so well drilled physically & tactically. Love the GAA . . . – Paul McGinley (who used to play underage with Ballyboden St Endas) still keeps an eye out for the Dubs.

It’s not really a problem if every country decides to shut off UK travel as we’re all getting on so well on this island – Eddie Pepperell (as he does) teeing up the possibility of being unable to travel.

Q
In playing a shot from just off the green, Player A hits the ball up the slope only for the ball to roll back down and it comes to rest against Player B’s foot after being accidentally stopped by her. In moving away from the ball, Player B causes Player A’s ball to move. What happens in this situation?

A
There is no penalty to either player and the ball must be replaced as required by Rule 9.5. This situation is covered by Rule 11.1b/2 (What to do when a ball moves after being accidentally deflected or stopped) and Rule 9 then applies with the requirement to replace the ball without penalty.