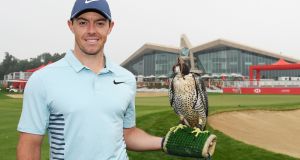 Rory McIlroy in Abu Dhabi in 2018. He will return to the UAE for the HSBC Golf Championship at Abu Dhabi Golf Club from January 21st-24. Photograph: Photo by Ross Kinnaird/Getty Images

Justin Thomas and Rory McIlroy, two of the world’s top four golfers, committed on Wednesday to playing in the Abu Dhabi HSBC Championship next month.

It will be the first European Tour event of 2021 and the first of four Rolex Series events on the tour’s schedule in the next calendar year.

The event is set for January 21st-24th at the Abu Dhabi Golf Club in the United Arab Emirates.

McIlroy is expected to begin his year in Abu Dhabi, where he has finished runner-up four times but hasn’t played since 2018.

“It’s always a great event for the players and it’s the perfect place for me to start the 2021 season,” McIlroy said in a release.

Thomas, 27, will be making his Abu Dhabi debut.

“I’m excited to play for the first time in Abu Dhabi,” he said.

“I’ve heard really great things about the course and with it being the first Rolex Series tournament of the year, I’m sure it is going to deliver a strong field. I enjoy new challenges, I like playing different golf courses around the world, and competing against the best players in the game.”

Thomas, ranked No. 3 in the world, has two wins in 2020 despite a limited number of events because of the coronavirus pandemic.

McIlroy is ranked No. 4 and hasn’t won an event since the World Golf Championships-HSBC Champions in November 2019. In 2020 he finished in a tie for fifth at the Masters Tournament and in a tie for eighth at the U.S. Open.