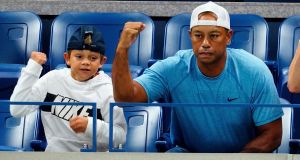 Charlie Woods and Tiger Woods will compete together at this week’s PNC Championship. Photo: Gotham/GC Images

Sawgrass, March 17th, 2019. The latest snapshot of lives less ordinary arrived in an eight-word answer from Tiger Woods. “I don’t let them go on social media,” said Woods in respect of his children, Sam and Charlie, when asked whether or not they may have witnessed an amusing mid-round incident at the Players Championship.

Keeping those aged 11 and 10, as was the case that spring, away from the all-consuming world of Facebook, Instagram and Twitter may seem sensible. There is a broader dynamic in this case: Woods’s global status is one thing, the abuse that can still be thrown his – or his family’s – way on account of an infamous infidelity scandal quite another. For every strand of adulation towards Tiger Woods the golfer, there is a barb about his private life.

Woods’s quest for privacy is such that he gave his yacht that very name. But something, gradually, has changed. In April 2019 Woods marched and screamed towards the scorers’ tent at Augusta National while holding his son’s hand. It wasn’t long before videos of Charlie Woods’s golf swing – mesmerising for one so young – emerged. Tiger has been photographed caddying for Charlie as the young man has been winning junior tournaments. This success has arrived in the junior golf hotbed of Florida, not the Isle of Man, providing tacit admission of his blossoming talent.

This weekend in Orlando, a new-found propensity for openness in Woods will be highlighted once more. The 15-times major champion will play alongside Charlie in the PNC, once the Father-Son, Championship. The tournament name evolved after daughters, grandchildren, stepchildren et al performed alongside those who qualified as either major or Players champions. For the first time in history there will be more focus during live television coverage on Tiger Woods’s partner than on Tiger Woods. Said partner just happens to be 11 years of age. Team Woods are as short as 6-1 to win. Pádraig Harrington and his son Paddy are the lone Irish representatives in a field of 20 pairs which has 67 Major championship titles.

“I was in the car heading home to Cleveland thinking: ‘If I could only pull together a serious tournament with the bells and whistles of the PGA Tour, where these guys play with their family, wouldn’t this be a great exercise and contribution to golf?’”

Johnston was also a neighbour of Woods in Isleworth. When the Scot congratulated the emerging star for his 1997 Masters win on the basis he had now qualified for the Father-Son, the response was a puzzled look. Twenty-three years on, Woods is immersed in the conversation.

“I have stayed in touch with people about how Charlie has been doing,” says Johnston. “I got a list of the ages of all past participants to Tiger, and Seve Ballesteros played with his 11-year-old son. I knew that would resonate.

“It fits with his revival, almost warm and cuddly but still competitive. And that’s the main thing; to ensure this is really a competition, not an exhibition. These guys are serious.”

Publicly at least, Tiger insists he just wants Charlie “to enjoy it”. At stake is $1m in prize money and the Willie Park trophy, named after the first person to be a major champion and then father a son who achieved the same feat (Park Jr won two Opens in the 1880s after his father’s four in the previous two decades). The winning duo also receive matching leather belts, made in London and to replicate those that used to be gifted to Open winners.

Woods’s relationship with his own father, Earl, was integral to his greatness. It was also sometimes brutally tough, by Tiger’s own admission. How a son of his own would be reared in the golf world has always been a point of fascination. There has never been any depiction of Tiger other than as a dedicated parent.

In proving this is becoming a serious subject, even Jack Nicklaus has addressed Charlie’s prospects. The 18-times major winner explained that Tiger has insisted his son must develop with bladed irons “so he learns how to play golf instead of learning with all those forgiving golf clubs”. The coming days may well be a further part of the education process – a soft entry to the spotlight Charlie will inevitably be afforded if golf remains his domain of choice. “Tiger is playing with him, he will be out there,” Johnston adds. “The competition is a scramble, which helps, and we are tape-delayed slightly for the broadcast so nobody will be embarrassed. There will be no spectators this year.

“Maybe Tiger is looking and saying: ‘If my son is going to be who I am, he has got to have a little bit of an edge, some confidence. This is the time to work with him.’ But he wants to win a tournament with his son. He wants the same belt as his son so they can walk around as champions.”

That would undoubtedly add to the levels of scrutiny, although the Woods contingent appear content to live with that. – Guardian