McGinley says McIlroy would be a ‘surprise winner’ of Masters 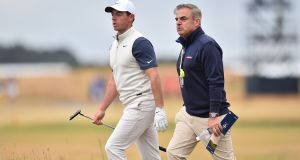 “I think he would be a surprise winner if he were to win. He showed no form post-lockdown of any significance!”

That, in a nutshell, is the blunt observation of former European Ryder Cup captain Paul McGinley about the prospects of Rory McIlroy at the Masters as the Northern Irishman takes further aim at becoming the first European player to join golf’s most exclusive club, that of being a career Grand Slam winner.

Only Gene Sarazen, Ben Hogan, Gary Player, Jack Nicklaus and Tiger Woods have ever won all four of golf’s modern Major championships . . . and McIlroy – without a Major title dating back to his PGA success in 2014, but with five top-10s at Augusta in his last six visits – is aiming to tick the final box to join the game’s greats. A green jacket would provide the final link.

While the lack of crowds at tournaments since the PGA Tour’s resumption have been cited as a reason for McIlroy’s lack of energy, McGinley – who will be an analyst on Sky Sports coverage this week – assessed: “It’s not about the crowds this week for Rory. If you want the crowds to motivate you and get over the line in Major championships, to become the sixth player in history to win a Grand Slam, that’s not where you need to be.

“Where Rory has got so far is down to self-movitation. It’s not someone else driving him. It comes internally. All the great champions in the game have got an energy inside them, that’s pushing them forward. It is not external.

“And what’s ticking inside Rory is going to be the key. In terms of the golf course this week, it should suit Rory. He is one of the biggest hitters in the game, he drives the ball fabulously well and that means he is going to have a lot of shorter irons where other guys are playing mid-irons . . . in general (with the conditions), you would think this is lining up nicely for Rory and the other thing that is going to work in his favour is he has been under the radar.

And, then, the reason why he would be a “surprise winner” if he manages to get that green jacket.

McGinley’s observation is backed up by statistics from the last five Masters winners, with players leading the field in strokes gained approaching the week finishing first, first, second, third and first, most recently with Tiger Woods last year.

If you get a chance during the television coverage of the Masters, do catch an eyeful of the footwear that Henrik Stenson and Erik van Rooyen will use to stride the fairways at Augusta National this week.

Ten years on from Fred Couples making a splash when he first donned Ecco’s original Golf Street shoes at the tournament, which became trendsetters in the industry, the Swede and the Springbok have been shoed in special editions of the Danish company’s S-Three hybrid footwear.

These rather cool new editions feature a custom-designed green collar and unique midsole colouring to mark the occasion with some further technological advances, including something called “direct injection innovation, Zonal Fluidform™” to provide balance and softness for the wearers.

Unfortunately for the rest of us, the shoes aren’t on general sale to the public. Not just yet.

94: The withdrawals of 2017 winner Sergio Garcia and Joaquin Niemann from the invited field for the Masters – due to a positive Covid-19 tests – reduced the field from 96 to 94 players for this latest edition.

“After 21 years of not missing a Major Championship, I will sadly miss the Masters this week,” said Garcia. “The important thing is that my family and I are feeling good. We’ll come back stronger and give the green jacket a go next April.”

“There were a lot of mud balls and looks like some rain during the week, so that can be an issue. It’s just going to play very differently” - Rory McIlroy speaking to espn.com after an advance visit to Augusta National with his dad Gerry to get a feel for the course. There is a forecast of thunderstorms through the week, while the remnants of Storm Eta could potentially track through the area over the weekend.

“This is what heaven looks like in November” - Ian Poulter getting his first look at Augusta National in its November setting.

“For the first time that I can remember the international break has fallen on the same weekend as @TheMasters I doubt you’ll give a toss, but this is great news” - former footballer turned soccer pundit Gary Lineker setting his priorities for the weekend’s viewing!

“Today was better than most” - James Sugrue on driving up Magnolia Lane after arriving to register for the Masters. Sugrue earned his place in the field following his win at last year’s British Amateur championship at Portmarnock, and has delayed turning professional until after the tournament (some seven months later than planned). Worth the wait all the same.

Not just one winner, but two, were declared at the European Tour’s season-ending Volvo Masters at Valderrama, where Bernhard Langer and Colin Montgomerie finished locked together after 72 holes and couldn’t be separated after two holes of a sudden-death play-off before darkness made further play impossible.

“I’m actually taking this as a complete win here, this is fantastic. I think I’m nought for whatever it was, 0-for7 (in European Tour playoffs). Well, we can add this one to the win column, which is a delight,” said Montgomerie who closed with a 70 to Langer’s 67 for both to finish on 281.

There was an added twist to the tournament, though, when television pictures appeared to show Monty accidentally touching the ball with his putter on the 10th green while it was still moving, a two stroke penalty. On finishing his round, however, Montgomerie convinced officials that he had not acted illegally and the play-off proceeded.

“I could not think of a better guy to share this win, and I do mean that,” said Langer after fading light brought matters to an end.