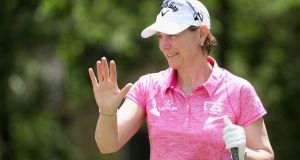 Annika Sorenstam’s influence as power-broker in golf is set to be expanded, after the 50-year-old Swede was confirmed as the successor to Peter Dawson as president of the International Golf Federation, the body which promotes golf as an Olympic and Paralympic sport as well as overseeing the world amateur team championships for the Eisenhower and Espirto Santo trophies.

A 10-time Major champion and serial winner on the main tours, with 72 career wins on the LPGA Tour and 17 on the Ladies European Tour, Sorenstam’s post-playing career has seen her expand into a number of business ventures - including golf course design, clothing as well as having lines in wine and perfumes named after her - while also being deeply involved in charitable work.

Sorenstam is scheduled to take over the IGF presidency from Dawson on January 1st 2021, with the outgoing president referencing golf’s return to the Olympics as “a landmark” for golf. “Our Olympic status has been a strong catalyst for increasing cooperation between the major organisations in golf and significantly strengthened the bonds between the IGF and our national federations,” said Dawson.

Another “Hello, World!” moment is dawning, it would appear.

Tiger Woods and his 11-year-old son, Charlie, will team-up for the PNC Challenge, a fun tournament with a bit of an edge which takes place at the Ritz Carlton Golf Club in Orlando, Florida, this weekend.

The event is confined to Major winners who pair up with a family member in a scramble format over 36 holes, with Bernhard Langer and son Jason the defending champions. Pádraig Harrington and his son Paddy are also among the field.

However, all eyes will be on young Charlie, who becomes the youngest ever player to participate.

Woods, the dad, has revealed the Covid-19 pandemic led to the two playing more golf together. “Because everything was shut down, the only thing that was available to us was golf. We just started playing a lot, and he started getting the bug for it and so did I. It kept me competitive, kept me in it when we didn’t have any tournaments,” said Woods.

“I’m not going to say it’s one of my goals for next year because you should never make Ryder Cup one of your goals. You should break it down to try and play well each tournament. But I could see it happening” - Lee Westwood, showing a wise old head on those 47-year-old shoulders. The Englishman claimed the European Tour’s season-long Race to Dubai title, with a runner-up finish to Matt Fitzpatrick in the DP World Tour Championship.

“Obviously all of what I’m going to say is related to the privileged world of golf I live in. It goes without saying that the world has been through hell this year, and the most important thing for me in all of that is my family have remained safe and that is the main priority. We’ve been lucky. It was a disappointing year for me on the golf course. There’s no other way to say it. There’s certain thing I have struggled with, but on the positive side I know what I need to work on and it’s nothing dramatic. I’m looking to make marginal gains that mean I will play my best more regularly and convert more victories” - Tommy Fleetwood keeping perspective and resetting his sights for next season.

2 - For the first time, two Irish players will compete in the CME Group Tour Championship, the season-ending tournament on the LPGA Tour. Stephanie Meadow and Leona Maguire will compete at the big-money, no cut $3 million tournament which starts at Naples, Florida on Thursday.

I’ll be competing again with my grandson, James, at this year’s @PNCchampionship After our first time competing together last year, I’m confident that we can put a greater challenge together this year! If he doesn’t deliver, I have 21 other grandchildren to choose from for 2021 - Gary Player putting no pressure whatsoever on his grandson. Really.

Massive congrats to @WestwoodLee and legendary caddy Helen on being #1 and winning the R2D. awesome to see that age is just a number as you continue to produce world class golf. No one deserves to be crowned champion more and you continue to support @EuropeanTour - Ross Fisher tips the cap to his fellow Englishman.

Delighted to get the win!! Nice way to finish the season!! - Matt Fitzpatrick on getting the job done in the desert, his win in the DP World Tour Championship jumping him from 22nd to 16th in the updated world rankings.

Q - Just before starting a round, Player A notices that Player B has put a ball on the tee which has “Practice” stamped onto it. Player A queries whether Player B is entitled to use such a ball in a competition. Player B insists that he can. Who is right?