‘I don’t show up in tournaments just to finish 10th or fifth. I show up to put on my best’ 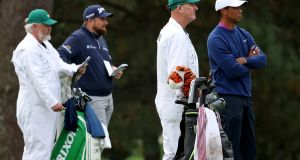 Shane Lowry has inputted the data into the memory bank, which – as he has been advised – is a necessary element of winning a Masters title at Augusta. And he has only five months to wait to put the information into practice!

“It’s actually going to come around very quickly, isn’t it?” mused Lowry, after a career-best tied-25th finish in his fifth appearance at the Masters offered an indication that he has finally got to grips with the nuances of the iconic course, and also armed with the knowledge that he will be a part of future tournaments for a number of years to come due to his five-year exemption from winning last year’s British Open.

And there is no intention to merely make up the numbers when he returns to Augusta National. “I’m here to win,” he insisted. “I’m not just here to learn, I’m here to compete . . . I don’t show up in tournaments just to finish 10th or fifth or whatever. I show up to put on my best performance and I’m hoping that brings to being in contention [in future tournaments]. When you get back [to Augusta], you want to kick on and try and win the tournament.”

Lowry completes his PGA Tour season at this week’s tour stop, the RSM Classic at Sea Island on the Georgia coast, where Graeme McDowell is also in the field, although his plans after that are a little uncertain. He has yet to decide if he is playing in the European Tour season-ending DP World Championship in Dubai, or take a break and resume in the new season in the Middle East.

LPGA Tour back in swing

After a mini-break, the LPGA Tour resumes this week with the Pelican’s Women’s Championship at Belleair resort in Florida . . . and it offers Leona Maguire and Stephanie Meadow the opportunity to strengthen their bids to make it to the season-ending CME Tour Championship next month.

Well, I left my birdie putt on the 72nd hole short. If I had the strength of my playing partner @b_dechambeau, I would have gotten it there. Look’s like I’ll be bulking up before @TheMasters next April 💪🏻

Out of all the things @TigerWoods has done in his career, today was the greatest lesson for all junior golfers out there that he’s ever given. That finish after the 10 on 12 was self control at the highest level!!

Some 2nd half performance from the lads, what a comeback!! @CavanCoBoardGaa 🔵⚪️ Never Give up 💪🏼 #cavanabú https://t.co/Ytx8N5JBrX

Maguire is 54th on the season-long order of merit and Meadow is in 59th, with the top 60 players advancing to the big-money tour finale.

There are three regular season events left on the revised LPGA Tour schedule: this week’s Pelican’s Championship; and then next month’s Volunteers of America Championship; and US Women’s Open in Texas – before the top 60 players compete in the Tour Championship, which has a $5 million purse for the limited field.

“I hope the course is much different in April . . . I feel like there’s a lot of shots I hit where I hit my number and it would spin back off a green or it just wouldn’t do what you expect it to do, so I’d love to get another shot at it in April and have the course player maybe more what we’re accustomed to” – Rory McIlroy looking ahead to the 2021 Masters after recovering from his opening round 75 to bounce back with rounds of 66-67-69 to finish in tied-fifth.

Henrik Stenson was like a golfing ATM machine towards the end of 2013, and he followed up his big pay day at the FedEx Cup on the PGA Tour by also scooping the European Tour’s equivalent, the Race to Dubai. And the Swede did so in some style, claiming the season-ending DP World Championship in Dubai by a six-stroke margin over Ian Poulter.

Stenson closed with a bogey-free 64 – six birdies and an eagle – in a masterful display for a tournament record 25 under-par total 263. “It’s tough when you’ve got a six-shot lead, five, six shot lead with only two or three holes to go. You probably would have to break a leg to mess that up, I would imagine. But you’ve still got to keep on going and focus on the right things and try and play simple,” said the Swede, who was world number three at the time.

Answer: This is covered by Rule 1.b(2)/2. Sharing clubs is not allowed for strokes that count in a player’s score. The prohibition against sharing clubs applies only to strokes that count in a player’s score. It does not apply to practice swings, practice strokes or strokes made after the result of a hole is decided. In this situation, there is no penalty under Rule 4.1b if, between the play of two holes, a player borrows another player’s putter and makes several practice putts on the putting green of the hole just completed.