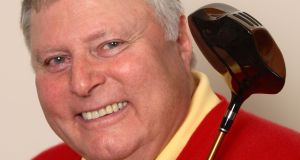 Peter Alliss, the voice of the BBC’s golf coverage for decades, has died at the age of 89. A statement issued by the former Ryder Cup player’s family on Sunday confirmed the death of Alliss – who had been on commentary duties for the Masters just last month – was “unexpected but peaceful”.

“It’s with great sadness that we announce the passing of golfing and broadcast legend, Peter Alliss,” said his family in a statement. “Peter’s death was unexpected but peaceful. Peter was a devoted husband, father and grandfather and his family ask for privacy at this difficult time.”

Director of BBC Sport, Barbara Slater said: “Peter was the voice of golf. He was an absolute master of his craft with a unique ability to capture a moment with a magical turn of phrase that no one else could match. Following a highly distinguished playing career, where he won 20 titles and played in eight Ryder Cups, his broadcasting career spanned an extraordinary 60 years.

“Just last month at the incredible age of 89, he was doing what he loved - commentating for the BBC on the Masters. He transcended his sport as one of the greatest broadcasters of his generation. He will be terribly missed and our thoughts are with his family, friends and colleagues at this very sad time.”

Keith Pelley, the chief executive of the European Tour, added: “We are deeply saddened to hear of the passing of Peter Alliss, truly one of golf’s greats. Peter made an indelible mark on everything he did in our game, but especially as a player and a broadcaster, and he leaves a remarkable legacy. Our thoughts are with his wife Jackie and the Alliss family.” – Guardian