Eye-watering price of a lesson with Tiger, word of mouth, Twitter Twaddle and more 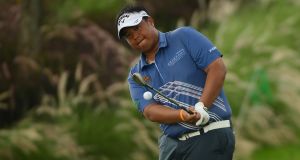 Kiradech Aphibarnrat of Thailand plays a shot during round three of the Indonesian Masters at the Royale Jakarta Golf Club. Photo: Arep Kulal/Getty Images

The wonderfully named Kiradech Aphibarnrat defied back pain - eagling the 72nd hole for a top-five finish in the Indonesian Masters in Jakarta on Sunday - to effectively seal a place in the field for the US Masters. Or has he?

In fact, the Thai golfer has given himself quite the dilemma. You see, Aphibarnrat had committed to playing in this week’s Boonchu Ruangkit Championship in his native Thailand, a tournament on the Asian Development Tour hosted by Ruangkit who is seen as the father figure of golf in the country. The tournament is the final counting event on this year’s official world rankings.

The quirky weighting system of the world rankings poses the problem for the likable Thailand player. By playing, and supporting the tournament, Aphibarnrat runs the risk of falling out of the world’s top-50 in the rankings at year’s end (he would need a top-10 finish to avoid dropping out). By not playing, he would be assured of being in that top-50 in the end of year rankings and so earn that precious ticket to Augusta. So, to play? Or not to play?

After finishing his weather-delayed final round in Indonesia, Aphibarnrat revealed he had fought through back pain for much of a day in which he played 28 holes (finishing his third round before completing the final round). As he put it, “it wasn’t an easy day with my back injury. I had only 25 minutes before going off in the final round and I didn’t have time to stretch my back and it was terrible for me. When we had the first stop (weather delay) I texted my family and my dad told me to give up and that it won’t be the last time I get a chance to qualify for the Masters. He told me to save myself and play good in the bigger events (in 2018).”

As it happened, Aphibarnrat didn’t take his father’s advice. Although the back injury would sound like justifiable cause if he doesn’t actually tee it up in Ruangkit’s tournament.

The price of a lesson with Tiger

Anyone who doubts the enduring appeal of one Tiger Woods should take note of the $210,000 raised at an auction for a private lesson with the 14-time Major champion and former long-time world number one.

PGA Tour player Chris Stroud – supported by fellow players Patrick Reed and Steve Elkington – organised a pro-am fundraiser in Texas to raise money towards the Hurricane Harvey relief which achieved its target of raising $1 million to support relief efforts for the decimated region.

However, the biggest single amount generated at the auction was for a private, two-person lesson with Woods that sold for almost a quarter of a million dollars.

Stroud, winner of the Barracuda Championship last season, has vowed to organise further fundraising efforts going forward. “This is the best event I have ever been a part of and this is just a start,” he told the Houston Chronicle. “We have a long way to go for recovery to this city and we want to keep going and raise as much as we can and help as many victims as can.”

“This is certainly my best week of the year. To play alongside all the legends like Nicklaus, Trevino, Faldo, Langer and so many others, as well as playing alongside my son, has been the greatest week of the year” – Two-time Major champion Angel Cabrera after winning the PNC Father/Son Challenge in partnership with his son, Angel Junior. The Argentines pocketed a cool $200,000 for their win, their 25-under-par total giving them a three shot cushion over Team Langer and Team Duval who shared second spot. Pádraig Harrington and son Paddy – debuting in the close season tournament – finished tied-16th of the 20 competing teams.

3/6/10: Since missing the cut at the US PGA, Justin Rose’s consistency has made him the hottest player on the planet with three wins, six top-five finishes and 10 top-10 finishes in the 10 tournaments he has played since then.

“-29 with two 62’s.....Justin Rose, I think you’ve earned a nice Christmas turkey dinner this year” – Eddie Pepperell tips the cap to Rose after his runaway win in the Indonesian Masters.

“Great form @JustinRose99 - 10 top 10s in a row including 3 wins to finish the season! Bottle the formula!! #templates” – former Ryder Cup captain Paul McGinley is more than a little impressed with Mr Rose.

“Congratulations @JustinRose99 on your record Indonesian Masters victory. Brilliant way to end 2017. Merry Christmas to you and yours. GP” – Gary Player passes on his congrats to Rose.

“Thanks to grandson GT and @PNCFatherSon for letting an old man have a lot of fun!” – the legend that is Jack Nicklaus – at the age of 77 – still getting the fun out of being competitive.

Q: After an approach shot, a player’s ball is overhanging the hole. The player walks up to the hole without unreasonable delay and notices that there is mud on the ball. The player marks the position of the ball and lifts it. He then cleans the ball and replaces it. The ball remains on the lip of the hole for about five seconds and then, as the player is preparing to tap it into the hole, the ball falls into the hole. What is the ruling?