Tommy Fleetwood says Rory McIlroy on the brink of his best 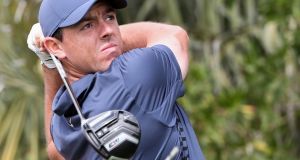 Rory McIlroy: finished in a share of third place on his return to competitive action in Abu Dhabi. Photograph: Karim Sahib/AFP/Getty

Tommy Fleetwood has started the new season like he finished the old one, at the top of the European Tour order of merit.

Yet, the Englishman – up to a career-high 12th in the world following his successful defence of the HSBC Abu Dhabi Championship – is aware that the player immediately in front in those rankings represents a serious threat if Fleetwood is to repeat his Race to Dubai title by year’s end.

That man is Rory McIlroy, who returned to competition after a three months layoff.

“He looked great, swung it great. He hit it really nicely, had control of his ball,” remarked Fleetwood of the Northern Irishman, adding: “I think as golfers, whenever you’ve had a long period off, you always sort of plan for a bit of rust. Not necessarily how you hit it, but just how you go about playing golf.

Playing golf is a whole different skill in itself. I thought he looked great. I think he’ll win more than once this year, easily. I think he looks really well.”

McIlroy hasn’t won a tournament since capturing the Tour Championship at the end of the PGA Tour’s 2016 season but has recovered from the rib injury which affected him through the 2017 and has planned a busy schedule up to the US Masters.

His third-place finish in Abu Dhabi showed no evidence of any rust.

Of what pleased him most with his performance, McIlroy said: “I think my attitude, my patience, my comfort level of being back in the [competitive] environment. I know it’s only three months but things change and I felt like maybe I needed a couple of weeks to get back into the thought process you need for competitive golf and scenarios and this and that. But I felt like I got back into that pretty quickly, that’s the most pleasing thing.”

McIlroy – a two-time winner of the Desert Classic, in 2009 and 2015 – is part of a four-strong Irish contingent in the UAE this week. Paul Dunne, who contended heading into the final round in Abu Dhabi only to fall away, Darren Clarke and Graeme McDowell are also in the field. McIlroy’s focus after Dubai will shift Stateside where he will concentrate on the PGA Tour in the build-up to the US Masters in April.