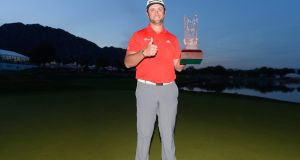 Jon Rahm of Spain poses with the trophy after winning the fourth hole of a sudden death playoff during the final round of the CareerBuilder Challenge at the TPC Stadium Course at PGA West in La Quinta, California. Photo: Robert Laberge/Getty Images

Jon Rahm continued his meteoric rise as he beat Andrew Landry on the fourth playoff hole to win his second PGA Tour title at the CareerBuilder Challenge in La Quinta.

Meanwhile, Ireland’s Seamus Power secured his best finish of the season so far with a tie for 11th to take home a cheque $135,700 and take a much-needed jump up the FedEx Cup rankings.

The Waterford man shot a final round, bogey-free 70 to finish on 17 under, five shots behind the playoff mark of 22 under.

With three cuts missed already this season and a previous best-placed finish of tied-18th at the Sandersons Farm Championship, Power’s finish will be welcome before heading into some of the bigger events on tour, beginning with next week’s Farmers Insurance Open.

Defending his title at Torrey Pines will be Rahm who justified his favourite tag on Sunday.

He was 137th in the world when he teed it up at at the Farmers Insurance Open 12 months ago but after also claiming two wins on the European Tour last season, he will be up to second when the Official World Golf Ranking is confirmed on Monday morning.

Rahm fired a bogey-free 67 on Sunday to get to 22 under, a total matched by American Landry who had a single blemish in his closing 68, birdieing the last to force the playoff.

The 23-year-old missed a good chance to take the contest on the first extra hole, with Landry returning the favour on the next, but a 12-foot putt eventually handed Rahm the win.

Envoi Allen the star attraction at Fairyhouse 06:00
Gordon D'Arcy: I know what Joe and Cheika would do. Fix the basics 06:00
Sean Moran: Bloody Sunday centenary weekend will live long in the sporting memory 06:00
Connacht hopeful Papali’i’s red card against Zebre may be rescinded 06:00
Cavan happy to play Dublin anywhere – even Croker, says Galligan 06:00
Here is your handy guide to sport on television this week