Shane Lowry has a second chance to nab US Masters place 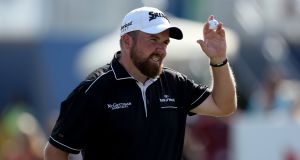 Shane Lowry will need a very fast start to his 2018 PGA Tour season if he is to book a place at the US Masters. Photo: Getty Images

There’s work to be done yet if he is to claim a precious ticket to the US Masters next April, but Shane Lowry’s late-season form – which finished with a tied-runner-up finish alongside Graeme McDowell in the QBE Shootout, an unofficial event on the PGA Tour – would indicate a glass half-full rather than glass half-empty approach to next season.

Lowry is 61st in the official world rankings, with the top-50 at the end of the year earning those invitations to Augusta. However, the 30-year-old Offalyman – who is moving to Florida in January for a six-month stay to cut out the multiple transatlantic flights which were part of his scheduling – has a second bite at breaking into the top-50 by the end of March, which is the final cut-off.

Of course, another win on the PGA Tour would be another way to earn a spot in the Masters field, and he is set to make his seasonal debut in the Farmers Insurance Open at Torrey Pines on January 25th-28th by which time he and his family will have completed the move to Florida.

“We said at the start of the week if we could go to dinner on Saturday night well in contention then we would be more than happy and that is what we managed to do . . . . but to be leading by two shots at one point near the turn and to finish runner-up is a tough pill to swallow,” said Lowry, who finished two shots behind winners Steve Stricker and Sean O’Hair.

Most of his peers have packed away their clubs for the ever-shorter golfing off-season but Justin Rose’s global odyssey continues this week when the world number six competes in the Indonesian Masters in Jakarta, where he will have a rather unique way of celebrating his 11th wedding anniversary . . . . his wife, Kate, a former international gymnast, will make her debut as his caddie in place of regular bagman Mark Fulcher!

The Indonesian Masters is the final counting event on the Asian Tour, although the destination of the order of merit winner is already confirmed with Malaysian Gavin Green – the first player from that country to win such honours – in an unassailable position atop the money list: among the perks Green will get are a place in next year’s British Open at Carnoustie and a spot in the WGC-Mexico championship.

As for Rose? Well, the Englishman has been criss-crossing the globe like an explorer these past few months and, it must be said, also augmenting his considerable bank balance.

Rose’s late-season plane-hopping started with a win in the HSBC-Champions tournament in Shanghai, followed by victory in the Turkish Airlines Open, a fourth-place finish in the DP World Tour Championship, a 10th place finish in the Hong Kong Open and fifth place in the Hero World Challenge in the Bahamas.

Although Rose confessed his wife “knows as much about golf as my little eight-year-old,” the plan is to “to make it fun” with the player taking on responsibility for his own yardages and reading of putts. And given his form of later, there’s little doubt that Rose will be competitive – as well as getting the chance to spend extra time with his wife on their anniversary.

Rose isn’t the only big name player to extend the season. Brandt Snedeker, an eight-time winner on the PGA Tour, is also making the trip to Asia to close out his year’s work in an event which is important for those players down the rankings aiming to secure full tour cards for next season.

“I actually wasn’t going to come here about a week ago . . . . so I’m really happy that I came” – Shubhankar Sharma after his win in the Joburg Open, a tri-sanctioned tournament on the European Tour, Sunshine Tour and Asian Tour, made the change of mind seem like an inspired decision.. The 21-year-old Indian’s biggest win of his fledgling career saw him jump from 462nd to a career high 226th in the latest world rankings. Sharma, who has been identified as a rising star in India, also earned a place in next year’s British Open at Carnoustie: with three qualifying spots available in South Africa, Sharma along with Erik van Rooyen and Shaun Norris earned early tickets to the Scottish east coast.

“Great week at the @QBEshootout with my good friend @Graeme_McDowell . It wasn’t to be but congrats to @stevestricker & Sean. Thanks to @SharkGregNorman and all the team for having us. #QBEShootout” – Shane Lowry on making the most of his invitation to the Shark Shootout where he got a nice pre-Christmas $257,500 payday.

“He’s not afraid and always learning. This is just the beginning” – Anirban Lahiri on Shubhankar Sharma, the new kid on the block.

“That’s my 2017 over. Not the 2 weeks I wanted but a great year overall. Starting the year with no category anywhere and to finish it with a European tour card is great” – Dubliner Gavin Moynihan after a missed cut at the Joburg Open saw him complete his competitive outings for the year.

Q: A and B are playing C and D in a four-ball match. At one hole C and D hole out and their better-ball score is 4. A, who had marked the position of his ball and lifted it, has a putt for a 4 but he mistakenly thinks B has scored a 4. Accordingly, A walks off the green, leaving his ball-marker on the green. B immediately advises A that he (B) scored a 5. So A returns to the green, replaces his ball and holes out for a 4.

C and D claim the hole on the ground that A cannot come back and putt after walking off the green, thinking his partner had halved the hole. Are C and D correct?

A: No. Since A had not waived his turn to putt and there was no undue delay, A was entitled to proceed as he did. If, however, A had not left his ball-marker on the green, and therefore the position of his ball was no longer marked, he would have incurred a penalty stroke under Rule 20-1 and would no longer have had a putt for the half.

1 Man City to investigate Kyle Walker over lockdown sex party
2 Ken Early: Mick McCarthy II was no blockbuster, more of a flop
3 Club World Cup to be proposed as alternative to Champions Cup
4 The Offload: Roll up for rugby’s very own horror film
5 Cheltenham controversy will pass for magnificent triviality of horse racing
Real news has value SUBSCRIBE