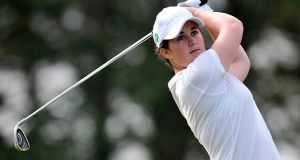 Lisburn’s Paula Grant gave her Curtis Cup hopes a boost when she carded rounds of 76, 72, 67 and 69 for a four under par total of 284 to finish third in the South American Amateur Championship in Argentina.

On a day when Castle’s Alex Gleeson tied for fifth in the men’s championship and Robin Dawson finished in a share of 12th, Grant ended up just two shots behind Paraguay’s Milagros Chaves, who claimed victory with a chip-in birdie at the last as the overnight leader Silvia Garces double bogeyed.

“It was a great week and the clubs arriving a day late wasn’t a major issue,” said a delighted Grant, whose clubs and luggage were delayed in transit - the clubs remaining in Heathrow as her baggage was sent to Chile instead of Buenos Aires - but leaves now with a bronze medal in her carry on.

“I just tried to do as much preparation as I could. It was nice to be able to dig deep and put in some good rounds after the bad start.”

The Irish Women’s Close champion was three shots behind Garces at Martindale Country Club overnight but after going out in two under, she followed bogeys at the 10th and 11th with three birdies on the spin from the 13th.

She was still four-under for the championship with two holes to play and briefly found herself in a tie for the lead with Chaves and Garces, who were playing in the group behind.

As Grant finished par-par for a 69 to lead in the clubhouse on four-under 284, Chaves followed a birdie at the 16th with another at the par-five 17th, where Garces made an eagle three to lead by two strokes from the Paraguayan on seven-under.

But the Colombian found greenside sand in two at the 18th, came up short of the green with her third and then chipped poorly 15 feet right of the hole after seeing Chaves spectacularly chip in for birdie three after going through the back of the green.

The winner shot rounds of 71, 72, 70,and 69 for total of 282 to win by a shot on six-under-par from Garces, who missed her bogey putt to force a playoff, with Grant a further shot back in third.

Victory was always going to be a challenge for Gleeson in the men’s event as he began the final day eight strokes behind Canada’s Chris Crisologo, the eventual winner.

The Castle player was alone in fourth, five off the lead with nine to play after going out in one-under 35 to Crisologo’s 38. But a level par back nine featuring two birdies and two bogeys meant he signed a one-under 71 and finished tied for fifth on seven-under with New Zealander Charlie Hillier.

Crisologo was just three ahead of Alejandro Tosti at the turn but birdied the 10th, 11th, 12th and 14th to go seven ahead and while he bogeyed the 15th, 16th and 18th, he still shot 73 to win by four shots from the Argentinian on 13-under par, clinching a place in the European Amateur Championship this summer.

Cathal Butler and Aidan McGrath survived sleet, snow and icy winds to take the prizes as only a handful of players finished their rounds in the TaylorMade Winter Series at Portmarnock Hotel and Golf Links.

Just 17 brave souls teed it up but according to reports from the north Dublin links, “most players walked in because they couldn’t feel their hands anymore.”

Apart from the snow and hail, freezing winds gusting to 40mph made for a miserable day’s golf.

But it didn’t stop Kinsale and Maynooth University’s Butler, who shot a four-over 75 to win the gross, or Portmarnock Links’ McGrath, who took the nett with a 76 off five.

McGrath went out first in the best conditions and managed to get the ball around in 10 over par, nett 76.

He was happy with his round even though he only had three pars on the front nine, keeping the ball in play before making six pars and three bogeys on the back nine.

Playing off plus two, Butler’s four-over 76 was a tremendous effort in the conditions.

He was out in two-over, sandwiching seven pars between bogeys at the first and ninth before coming home in two-over-par with his two bogeys coming at the 10th and 16th.

The ILGU have launched a new Order of Merit for Women and Girls that will see a more even spread of counting events between both international and national tournaments throughout the calendar year.

The new OOM will now be based on finishing positions rather than scores against CSS. Higher rated events will be weighted heavier than smaller events.

There will be a limit as to how many events can be played within certain categories.

Never before has there been an Australian Amateur Championship winner from Japan, but now we have two.

The time-honoured titles, presented by Swinging Skirts, were whisked to the Land of the Rising Sun by firstly Suzuka Yamaguchi with an awe-inspiring performance in a 6 and 5 win over the highly fancied Ayean Cho at Lake Karrinyup Country Club.

And less than an hour later, another impressive performance culminated in victory for Keita Nakajima in the men’s division, bowling over the nominal favourite David Micheluzzi 4 and 3.

Yamaguchi was, remarkably, 12 under par through the final’s 31 holes, rolling in two eagles and 10 birdies in a display belying her tender 17 years.

Cho, for the second time in three years, was relegated to the runner-up position, but in defeat should hold her head high to have gone so far through the 36-hole finale against the Japanese wrecking ball.

Nakajima was an early leader against the Victorian who had been red-hot in winning his past two events and only being pushed once past the 15th in match play all week. But try as he might, Micheluzzi couldn’t ever get on level footing despite having several key chances early in the afternoon’s second round.

Nakajima made six birdies in his morning round, then another four in the afternoon to keep every challenge at bay.