Tiger Woods looks in good shape to be competitive again 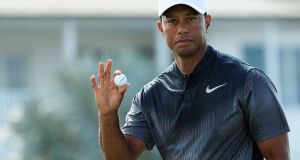 Tiger Woods: seems to have overcome his injury problems and is ready to return to the PGA Tour this week. Photograph: Mike Ehrmann/Getty Images

This is where it gets real (again) for Tiger Woods. For those who indulged in a guessing game about where and when he would return to competitive action, the odds were always stacked in favour of the Farmers Insurance Open at Torrey Pines, a tournament he won seven times during his PGA Tour career.

Add in the 2008 US Open, his 14th and last Major win, and there’s no doubting that his familiarity with the course was a key factor in his decision-making.

But what are we to expect of Woods this week on his real return to competition? Okay, he dipped his toes in the water when competing in the Hero World Challenge in December (when he finished ninth of 18 players in the limited-field tournament) but this is different, a scorecard in his pocket, raised expectations and more questions to be answered.

It is exactly 12 months since Woods last competed in a PGA Tour event, also in the Farmers Insurance Open. He missed the cut, and the following week played in the Dubai Desert Classic where he withdrew with a back injury.

Subsequently, he underwent spinal fusion surgery and spent most of the year on the sidelines. His return has been eagerly anticipated, reflected in bookmakers’ odds cutting him to as low as 20 to 1 to actually win on this latest comeback.

From playing a casual round with former US president Barak Obama to teeing up in rather more serious competition with fellow tour players, among them Rickie Fowler, Woods’s preparations for a return to life on tour have been carefully planned. He has also ended his working relationship with swing coach Chris Como, preferring to figure things out for himself. That could be a sign that, for the first time in a long time, he is actually comfortable with where his swing is at. We’ll see.

Interestingly, one of his former coaches, Hank Haney, has predicted a top-10 finish for Woods this week in a field that features four of the world’s top-10 and 11 of the top-25.

“I’m very confident in his comeback. I think he will win this year. I really believe that. I don’t see why he won’t play well. I don’t buy the rust thing. I didn’t see that out of Tiger in his career. He’d come back from a layoff and play well. When you hit balls into the bushes or two fairways over, that’s not rust, that’s a bad golf swing,” said Haney.

Critically, Woods finally seems to be playing pain-free golf again having been troubled by a series of injuries in recent seasons. One of those who played a watching brief in his recent round with Obama was Claude Harmon III, son of Butch.

“He looks like he is going to be relevant, and he hasn’t look like he could be relevant for the last three, four years . . . he’s driving it a long way. I mean, he’s hammering it,” revealed Harmon.

Woods’s return to duty adds extra spice to the Farmers Insurance, where Jon Rahm – winner of the Career Builders Challenge at La Quinta, when he fought off Andrew Landry in a play-off – is the defending champion.

Shane Lowry, who is now based in Florida, and Pádraig Harrington are also making their seasonal debuts in the Farmers while Séamus Power, coming off an 11th place finish, will seek to maintain y that momentum. Power moved from 134th to 90th in the latest FedEx Cup standings on the back of that finish in La Quinta.

Lee Westwood rolls back the years to lead by one in Abu Dhabi 14:47
Pitchfork pundit Joe Brolly taking the subscription TV dollar? Say it ain’t so! 09:00
Manchester United badly need another Harry Maguire masterclass 08:00
Ulster look to secure quarter-final place with win against Bath 06:00
Leo Cullen: Benetton will play hard to beat in Treviso 06:00
Here is your handy guide to sport on television this week