Tiger Woods gets sentimental at Riviera and vows to keep trying 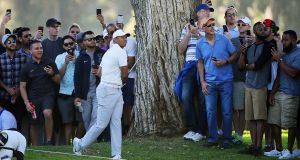 Tiger Woods watches his approach shot from the rough on the 11th fairway during the second round of the Genesis Open at Riviera Country Club. Photo: Reed Saxon/Ap Photo

Justin Thomas, 24, hitched a ride last week on Tiger Woods’s private plane to the Genesis Open at Riviera Country Club. When Woods reminisced somewhere over America about first negotiating the course as an amateur in 1992, Thomas, a breakout star on the PGA Tour, noted that he was born a year later.

“That really put things in perspective,” Woods, 42, told the news media on Tuesday, before referring to his other playing partner in the opening two rounds as “a great kid.” Rory McIlroy is 28.

As if Woods needed another reminder about the actuarial life table for elite athleticism, he slopped to a five-over-par 76 on Friday that resulted in a pink slip from the tournament. Still rusty after extensive layoffs from four back surgeries, Woods was reduced to grimacing, head-shaking and occasionally mouthing expletives amid wildly inconsistent shotmaking.

Long accustomed to eying the top of the leader board to check who is contending with him for a title, Woods could only pay attention to the projected cut line on Friday. His aggregate score of six-over par was certain to be insufficient on Saturday morning, when the final few stragglers were to complete the second round, which was halted by darkness.

“I’m starting to come back, and it’s going to take a little time,” Woods said after bowing out of his second PGA Tour event since April, when he had his latest surgery. “I am progressing. I’m starting to get a feel for tournament golf again.”

Over 36 holes here, Woods registered just 15 pars; a pile of 12 bogeys (plus a double) buried him deep on the leaderboard.

After tinkering with his driver over the three weeks since he rejoined the tour, Woods was especially errant off the tee. Putting, which provided a lifeline in his one-over first round, deserted him Friday, with the stroke count on greens rising to 32 from 25.

“I think everyone has to be patient with him, especially him being patient with it and just give himself time,” McIlroy said. “It’s not too far away.”

Still, the ungraceful exit was disconcerting to Woods. At the Farmers Insurance Open at Torrey Pines last month, he made his first cut since August 2015, finishing tied for 23rd after playing each round at par or better.

Riviera was the backdrop for Woods’s initiation onto the tour, and he expresses devotion to the layout despite never having mastered it. He was introduced to spectators ringing the first tee as the “tournament host,” with his company operating the event and his foundation, geared toward educating low-income youth, serving as its beneficiary.

His mother, Kutilda Woods, who helped rear him about an hour’s drive from Riviera, blended into the ample gallery that strode every step with him.

“For her only child to go through the struggles was a little rough on her,” Woods said, “so she’s very proud of me getting back out there.”

Woods said after Friday’s round that his knees were “a bit sore, but that’s just all age.” He did not mention trouble with his back, and he committed to playing in the Honda Classic in the coming week.

Missing the cut at Riviera will offer him extra time to recover from soreness and to prepare for the Honda Classic, which is near his current residence in South Florida. It will be the first time Woods has played tournaments in consecutive weeks since 2015.

He could have taken more rest back home and worked on his game without the stress of a formal event. But he said he craved time in a competitive environment, which he sees as vital to elevating his game.

“It’s so different playing tournament golf versus playing at home” with nothing at stake, he said. “I’ve just got to play more tournaments.” – New York Times service

Johnny Sexton points to the positives but admits top tier still a way off 18:24
Derby’s win overshadowed by Millwall fans booing as players take the knee 17:52
Bezuidenhout stretches five clear as he closes in on back-to-back titles 17:22
Kevin De Bruyne masterclass guides Man City to comfortable win over Fulham 17:11
Ireland 31 Scotland 16: How the Irish players rated 17:04
Here is your handy guide to sport on television this week