Matthieu Pavon has the halfway lead in Muscat, as Clarke shoots a flawless 67 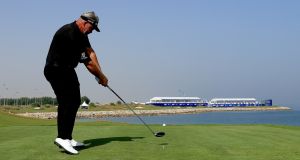 Darren Clarke tees off on the par four 18th hole during the second round of the NBO Oman Open at Al Mouj Golf. Photograph: Andrew Redington/Getty Images

Three weeks after disqualifying himself from the Dubai Desert Classic, France’s Matthieu Pavon enjoyed a happy return to the Middle East by claiming the halfway lead in the NBO Oman Open.

Former Open champion Darren Clarke is six shots further back following a 67, his lowest score on the European Tour since 2015. The Irishman is five under par overall after his flawless second round.

Pavon notified the European Tour that he had inadvertently signed for an incorrect score during the third round in Dubai, a four being recorded on the 10th instead of a five.

But there were no such worries in Muscat following a second round of 65 which gave the 25-year-old a halfway total of 11 under par and a two-shot lead over England’s Matthew Southgate.

“It was really good fun, I really enjoyed every part of my game today,” said Pavon, who finished third at the same venue in a Challenge Tour event in 2016. “Everything was really consistent and solid. I played a lot of good shots and a few really good putts, so everything was just really good.

“I’ve got a lot of good memories of this course which helps. When you play bad on a course and then have to go back there you have some bad memories but here it’s just the opposite — I just have so many good memories so I’m just trying to surf them!”

Southgate had to settle for a second round of 70 after finding the Gulf of Oman with his tee shot on the 18th to run up a double bogey, but he refused to be too downbeat.

“I feel really in control of my game and emotionally I’ve been really good on the course,” Southgate said. “I just switched off a little bit on the 18th tee. I made a poor swing and a poor error and I’m not surprised. It’s a hot day and it’s taken a lot out of me.

“There are going to be hundreds of shots that I hit in my career that I’m not happy with and that was just one of them. I think I’m playing the best golf of my life which is the goal because I look to just improve all the time.”