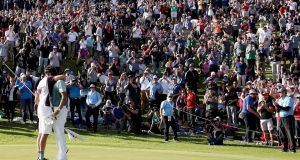 Bubba Watson holed a bunker shot at the 14th hole to set the stage for a two-stroke triumph at the Genesis Open – and 10th PGA Tour title – in Los Angeles on Sunday.

Watson pulled away with another birdie at the par-five 17th as he shot a closing two-under-par 69 at Riviera.

The long-hitting left-hander finished at 12-under 272 for his third victory at Riviera, after previous successes in 2014 and 2016.

Fellow Americans Kevin Na and Tony Finau tied for second on 10-under.

A two-times Masters champion, Watson will jump back into the top-50 in the world after starting the week ranked 117th.

Graeme McDowell had started the final round two shots off Watson’s lead. A birdie at the first hole of his final round got him to nine under but it proved a false dawn as he would make two bogeys to the turn and then drop five shots in six holes as he closed with a six-over 77 to finish in a share of 26th position on two under.

Rory McIlroy moved in the other direction as he put in a strong final round of three-under 68 to finish a shot better than McDowell on three under.

Pádraig Harrington closed with a three-over 74 to finish the week on five over par.