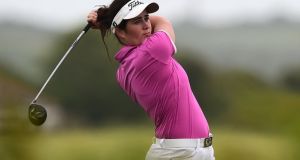 Paula Grant will represent Europe at the Patsy Hankins Trophy next month.

Paula Grant has been selected to represent Europe at the Patsy Hankins Trophy next month. The event, which see’s two teams of twelve representing Europe and Asia-Pacific, will be played at Doha Golf Club, Qatar from March 8th - 10th.

Grant’s selection comes following a consistent start to the 2018 season for the Lisburn player. A second place finish at the South American Amateur in Argentina followed by a top 15 at the Portuguese International Amateur suggest that the Lisburn native is determined to continue her fine form from 2017 which included the Irish Women’s Close Championship title and the Doris Chambers Trophy as leading qualifier at the British Ladies Open Amateur Championship at Pyle and Kenfig.

Whelan best of the Irish in Portugal

Newlands’ Jake Whelan was the best of the Irish in the Portuguese International Amateur Championship at Montado Hotel and Golf Resort. The Leinster interprovincial came back from two-over after three holes to close with a two-under-par 70 and finish 44th on three-over par after rounds of 70 74 77 70 for 291.

He was one clear of Spain’s Jorge Maicas on 11-under after 54 and closed with a four-under 68 as the Spaniard shot 71 to finish fifth.

Four Irish competitors will tee up at this year’s Concession Cup that will be hosted by The Concession Golf Club in Florida from April 16th to 21st.

Warrenpoint’s Colm Campbell will be joined by Douglas’ Peter O’Keefe in the Mid-Am category while elder statesman, Bangor’s Garth McGimspey and Dublin’s Adrian Morrow have been selected in the Senior and Super Seniors categories respectively.

Players will compete over three days through the traditional team match-play formats of foursomes, fourball and singles. Each team will be comprised of 14 players separated into three categories: six (6) Mid-Am members (age 25 to 54), six (6) Senior members age 55 and older and two (2) Super Senior members age 65 and older.

Bob Lewis will captain the U.S. Team with Peter McEvoy taking the reigns for team GB&I. Lewis will lead the U.S. Team in defence of their back-to-back Concession Cup titles. McEvoy looks to steer the GB&I squad to victory and take the Sir Michael Bonallack and William Campbell Trophy across the pond for the first time.

Ireland’s Curtis Cup player Olivia Mehaffey claimed her first win on the United States women’s college golf circuit, albeit in the absence of a playoff she had to share the honour with two players, Kaitlyn Papp (Texas) and Lilia Vu (UCLA). The trio finished on one-under par 212 at the Northrop Grumman Regional Challenge at Palos Verdes Golf Club, California.

Mahaffey, from Royal Co Down Ladies Club and a student at Arizona State University, had rounds of 68, 71 and 73, her opening round included her third competitive hole in one. She birdied the 12th and 18th in her final round, which proved final in the final analysis.

The champion after opening rounds of 69 and 70 shot a 64 in the third round to take a substantial seven-stroke lead over Rafferty and Martin Vorster into the final round. And while Lambrecht shot a joint-best of the day 66 to get to 11-under, du Preez’s one-under 71 gave him the title with three strokes to spare on 14-under par.

Naas’ Jonathan Yates also played well on the final day, carding five birdies in a one-under 71 to finish 36th on seven-over. Tiarnan McLarnon and Barry Anderson finished down the field, the Massereene man tied 64th after a closing 84 as Anderson missed the 54-hole cut by just one stroke.

Ireland’s Robin Dawson has been selected on Europe’s 12-man team for the Bonallack Trophy match against Asia-Pacific in Qatar from March 8th-10th. Europe, the reigning champions, have won the last five matches and will defend their title at Doha Golf Club.

Twelfth in the recent South American Amateur Championship, Dawson won the World University Championship in 2016 and had a stellar season last year with runner-up finishes at the European Nations Cup at Sotogrande and the South African Stroke Play Championship.

Kearney back to winning ways

Royal Dublin’s Niall Kearney returned to the winner’s circle when he carded a two-under-par 69 to win the nett in the TaylorMade Winter Series at Portmarnock Hotel and Golf Links.

The former Walker Cup player and two-time Irish Professional Championship winner birdied the fourth to be out in one-under 34, then picked up further shots at the 10th and 14th before making his lone bogey of the day at the par-three 17th.

Tullamore’s Stuart Grehan claimed the best gross with a level par 71, edging out Galway’s Ronan Mullarney based on his last three holes with Laytown & Bettystown’s Eugene Smith third with a 72

Mullingar’s Adam Smith, playing off scratch, came home in level par to shoot a two-over 73 to take the second nett prize on a countback from Courtown one-handicapper Ross Steedman

The par-four 18th again proved crucial with Black Bush’s Sean Doyle the latest victim. He was one-under for his round before a triple bogey seven saw him finish with a 73, scuppering his chances of a prize on a day when 88 players took to the links.