Caddying in a pandemic: A strange year on the Trump-centric PGA Tour

Colin Byrne: Focus on winners and losers in the US will hopefully change after this year 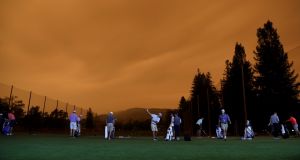 Golfers warm up on the driving range during the preview day of the Safeway Open at Silverado Country Club in September in Napa, California. Wildfires raged throughout the state as record high temperatures and dry vegetation fuel the fast-moving, destructive blazes. Photo: Jed Jacobsohn/Getty Images

It’s hard not to be affected by the happenings of 2020. I am sure we will look back in a decade and have to draw on the memory of what life was like in a pandemic, having forgotten much of the inconvenience and hardship and reflect on the changes it made to our lives.

The most recent previous life-changing year was back in 2008 when only our financial world and the lofty entitlement into which we had fallen collapsed and the harsh lesson of borrowing and repayment was learned. Or was it? Humans really do seem to have short memories when it comes to pain. How else would we go on, I suppose.

We have all adapted to our new lives, I only forget my mask once a day now instead of 10 times. My hands are adjusted to the constant hand scrubbing and not feeling as rugged as they were back in June. I have an inbuilt six foot sensor and I have learnt to break wind in order to conceal a much feared antisocial cough instead of the other way around. How we humans adapt.

So I went back to America in September with trepidation. I was fearful, instead of inquisitive, as I had been decades before on my first transatlantic caddying adventure. The PGA Tour had insisted that I would be admitted entry to the United States under a special exemption they had arranged with Homeland Security.

I was pretty sure I would be turned back when I approached immigration in Dublin airport last September. The process was a little different, but sure enough I sailed through and boarded my State-bound plane, with hardly anyone else on board. Eerie. The San Francisco flight had been pulled due to lack of traffic, so I had to transfer in New York, which was a big compromise to a seasoned traveller, but such was the new Covid world.

I had been advised by the extremely efficient PGA Tour staff about the pre-testing protocol at events and was fairly confident about how all of this would work. So my first nostril probe happened in the Napa Valley, in a tent in a car park outside the Silverado Country Club in an intense unseasonable heatwave. It must have been 35 degrees. I had downloaded the ‘Healthy Roster’ app and awaited my result under the shade of a towering gum tree. What would have happened if this pandemic struck pre-smart phones? About 90 minutes after my test the negative result zapped through to my phone and I returned to the test area to receive my ‘healthy’ wrist-band, which told the security at the course that I was ‘clean’ and ready to enter the premises.

Of course the fierce heat of California brought with it the raging fires that are common but occurred way earlier than normal this year. The Napa Valley was on evacuation alert earlier in the week, keeping a watchful eye on the wind direction in case it turned towards us.

I arrived at the course early on Wednesday thinking I had got my time wrong. It was after eight and it was still dark. It got to 10 in the morning and it was the same murky light. There was a dark orange hew across the course. The golf ball had a thick film of soot on it after it rolled across the green. It was like the twilight-zone, the day never lightened, we squinted through a tangerine, dark haze all day long. The monotony of the tour was no more, things had definitely changed.

I greeted colleagues that I had not seen for over half a year and got to grips with the 2020 protocol on tour. I found out pretty quickly that the tour staff had taken a significant pay-cut because of the new circumstances and the commissioner had taken a total pay-freeze. All this, while the players were competing for the same purses as before. It didn’t seem right.

I had never caddied in the States traditionally after September so I was embarking on new events each week played under very different circumstances. By week three, the pre-event testing and the end-of-event testing became ho-hum. The tour had arranged a charter plane to take us (strictly players and caddies only) to the next event. In order to board you had to pass another Covid test taken on the Saturday before the Monday charter.

Without being antisocial it was actually quite enjoyable not having a mouthy mob to deal with outside the ropes. Not that it was of acute concern to the groups we were normally playing with, but we used to get some stragglers with us. Not having the Wednesday pro-am was a luxury that was always going to be hard to get used to when the amateur pre-tournament jamboree recommenced in October. The fact was that we couldn’t expect the same purses without the vital amateur connection on a Wednesday.

Sailing around the environs of the events without spectators made a world of a difference to us from a traffic perspective. It was a relief to be simply dealing with local road blockages rather than the jams that spectators naturally cause.

One of the real luxuries of our new Covid world on the PGA Tour was the meal service that was provided by most of the events. You ordered food in the morning and it was waiting for you as you left the course in the evening. We were being encouraged not to go out to eat, despite many options for eating out at most venues.

As we were all easing into the new way of life on tour along came the presidential election. You can add golf to the list of no-talk topics when imbibing. The golf tour and its country clubs are naturally havens for Republican sentiments, so you needed to tread softly when it came to discussing the bizarre election shenanigans that have surprised few but baffled many because of how normal the notion of election fraud and vote-counting seemed to be. It was a delicate act searching out like minded-colleagues on tour. I finally found a few, at Augusta of all places, and in November when it was hotter than it ever had been in April.

The course looked relatively tatty at the start of the tournament week, but in true Augusta National fashion was pristine perfection by the first round. It was very soft, which produced the exceptionally low 20 under par winning score from Dustin Johnston. The excitement of my week was figuring out if my player was going to eliminate about 10 players from the halfway cut by making a closing-hole birdie in our second round. We didn’t, and our influence on the autumn Masters was over.

Having avoided serious disruption caused by the pandemic it all caught up with me by mid-November. I travelled in a car with a fellow caddie who tested positive in Sea Island, Georgia when we arrived on the Monday after the Masters. I tested negative and continued to test negative on a daily basis. But it marked the end of my tournament and year in very unceremonious fashion, but thankfully Covid-free. My isolation gave me time to reflect on coming to America and leaving it and the impression that golf in the political regime of the past four years has left with me.

I remember distinctly the first experience of competition in the States. It was about the winning, not competing. The opposite of what I had been brought up to believe. It’s all about the winner, you only get reminded of those who finished second when they win. This noble notion of taking part was soon knocked out of me in America.

Then I started to observe how people behaved around me in society, particularly in the country clubs that we were frequenting. There were way more Trump/Pence bumper stickers in the car park than Biden/Harris ones.

I had always been aware of the importance, perhaps over-importance of sport and sporting greats, winners, in America. This notion seemed to be taking over politics. It didn’t seem to be about morality and policy at all, it was simply about winning and creating a divide and gloating and looking down on the perceived ‘losers’.

Winning is a strange concept in golf, because even if you are very successful in the game over a long period of time, you don’t actually win that often. So to put it in stark and simplistic Trump-speak “you are a loser” for most of your career.

It has been a tough year for humanity. When I went back to the States last September, as the chasm between Republican and Democrat widened even more than seemed possible, my biggest conundrum on tour was trying to figure out if there were any Democratic tendencies at all.

There were very few. Even some of the most thoughtful, kind and reasonable colleagues with whom I had spent so much time with over the years, could still justify voting for Donald Trump.

Covid had brought people together emotionally at the end of four years of Trump driving them apart. We need to value the competition again and not just the victories.