Peter Alliss: The voice of golf in his own words 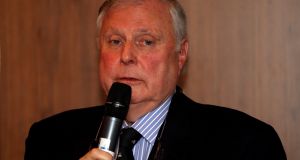 Peter Alliss addresses the room during the European Tour golfer of the year lunch at the Royal Lancaster Hotel in London in December 2011. Photograph: Andrew Redington/Getty Images

“I still get hurt by the criticism. I might get a hundred letters and 95 of them are very nice but I remember the five that call me a prick. They’re usually badly spelt and scrawled on yellow paper.” – On his fan – and hate – mail.

“Ooh, Carol Vorderman, I like her. I was watching Countdown last week and I got aroused . . . seven letters wasn’t a bad score, I thought.” – Ken Brown, sitting beside him, spontaneously combusted.

“I like a bit of rough. Who doesn’t?” – Too much information.

“It’s like turning up to hear Pavarotti sing and finding out he has laryngitis.” – On Tiger Woods’s third round of 81 at the 2002 British Open.

“Oh, he’s here again. Chloroform please, nurse.” – On hearing one of those ‘GET IN THE HOLE’ howlers.

“They do it with a happy smiley face and very little money. It’s a vocation – like nursing used to be in the 30s and 40s.” – Paying tribute to the camera people during miserable conditions at the British Open, and upsetting the nursing union all at the same time.

“It’s a great talking point, it’s rather like human rights and health and safety – bits are okay and some of the rest is rubbish.” – Discussing golf’s disqualification rules. To this day, his colleague Hazel Irvine, who was alongside him, is wondering which bits of human rights are rubbish.

“He’s got a kind face. In a previous life, he would have been a black Labrador.” – On Fred Couples.

“He looks like he’s been around the world in a boat – and just come ashore.” – On Pádraig Harrington’s walk.

“His wife Kim looking on, thinking: ‘If this goes in, we get a new kitchen’.” – On Zach Johnson’s wife as he lined up a putt to win the 2015 British Open.

“When did the fetish for white trousers come in? Almost as if they’ve taken a job lot from the referees at Wimbledon, or a painter and decorators’ convention week, or something. Nearly everybody’s got white trousers.” – On the fashion of the day.

“Don’t leave your dirty underwear lying about. Don’t fart in bed. Fart in the bath if you like because you can then play with the bubbles. Treat her with great respect. Look after her and she’ll look after you. May you and your wife be as happy as my wives have been.” – His marriage advice for a friend of his BBC colleague, Dan Walker.

“He Twitters about every bloody thing.” – On Gary Lineker’s social media habits.

“I think women are more delicate than men. I like holding chairs for women. I enjoy the company of women. I don’t want to be bullied by them. I don’t care for macho women, and yet they’re prevalent today. And very forward.”– On the ladies.

“How can you be the greatest player in the world for 12 years and then have lessons on how to swing again? It’s like Pavarotti deciding he is going to sing baritone. It’s bloody ridiculous.” – On Tiger Woods hiring a new coach.

“No matter how you wrap it up, women will never be able to do things that men can do. If we want to be equal, are you going to get a woman fighting for the heavyweight championship of the world? Punching each other in the breasts for six minutes doesn’t seem a sensible thing to do.” – It would have a right hoot if he was put behind the mic for a Katie Taylor fight.

“I do sound like Colonel Blimp here, but when I was a boy, that was the greatest contraceptive: getting VD or putting a girl in the family way. If you did that, you had to marry her, there were no two ways about it. The other turning point was the end of national service. But that’s gone. You’d have to have a revolution to bring it back.” – On wishing contraception had never been invented and national service never ended.

“I’ve never seen crusades like this. There’s just a few agitators who start it. The equality thing has buggered up the game for a lot of people . . . if somebody wants to join, well you’d better get married to somebody who’s a member.” – On not being overly keen about the campaign to end male-only membership in golf clubs.

“It would be very easy to drool with sentimentality over the Ryder Cup. But, at the end of the day, it is simply two teams trying to knock seven bells out of each other, in the nicest possible way.” – On the Ryder Cup.

“I remember people coming back from the war. When they heard an OBE had been awarded to someone who hadn’t fought against the Nazis but had stayed at home and sold sugar on the black market, they’d call it Other Bugger’s Efforts. Honours like that should only go to people who are brave in battle or help others less fortunate than themselves. I was just doing a job and there’s nothing courageous or special about being a golf commentator. So I was never going to consider an OBE for services to golf.” – On why he turned down an OBE in 1993.

“It is not a matter of life and death. It is not that important. But it is a reflection of life, and so the game is an enigma wrapped in a mystery impaled on a conundrum.” – On the game of golf.

“Oh, I don’t worry about things like that. I just want people to think, ‘He was fun.’” – On being asked how he would like to be remembered.