Peter Alliss: The colourful, and controversial, voice of golf 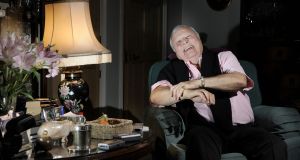 Peter Alliss at his home in 2009. Photo: David Ashdown/Getty Images

Peter Alliss, who has died at the age of 89, was a former professional who became the ‘voice of golf’ and gave lessons to James Bond.

Alliss, who won more than 20 tournaments during his career and played on eight Ryder Cup teams before making a successful move into golf commentary, died suddenly and peacefully on Saturday evening at his home in Surrey.

Born on February 28, 1931 in Berlin — where his father Percy worked as a club pro — Alliss weighed 14 pounds and 11 ounces at birth, which he claimed was a European record at the time.

Percy was one of the best British golfers of the 1920s and 1930s and made four Ryder Cup teams, although he was left out by captain George Duncan for the home side’s victory at Moortown in 1929.

Peter unsurprisingly followed in his father’s footsteps and quit school at the age of 14 to work for him at Ferndown Golf Club in Dorset, before turning professional himself two years later.

After his career was largely put on hold by two years of National Service in the RAF from 1949 to 1951, Alliss soon began to make a name for himself and finished ninth in the 1953 Open, one of five top-10 finishes in the event.

That performance helped Alliss gain selection for the Ryder Cup in October, making he and Percy the first father and son to play in the biennial contest, but Peter suffered a crucial singles defeat to Jim Turnesa as the home side lost by a point at Wentworth.

Alliss went on to make eight appearances in the Ryder Cup, although he failed to contribute a point during Great Britain’s only victory, at Lindrick in 1957, during that spell.

The following year brought impressive individual success, with Alliss winning the Italian, Spanish and Portuguese Opens in successive weeks, but the chance occurrence which would eventually lead to a change in career was not far away.

Flying back from a tournament in Ireland in 1960, Alliss was overheard talking to a friend and caught the attention of another passenger.

“I was nattering away, as you do, and about 10 days later a letter plopped on to the mat from a fella called Ray Lakeland at the BBC,” Alliss recalled.

“Apparently, he’d been listening to our stories from the seat behind and he asked me if I’d like to come along and do some commentary at the following year’s Open.”

Alliss did as requested and combined commentary stints at Royal Birkdale with finishing eighth behind Arnold Palmer, helping to raise his profile to such an extent that he was chosen to give Sean Connery golf lessons before the actor played James Bond in the 1964 film ‘Goldfinger’.

The film featured a famous scene in which Bond plays golf against the eponymous villain Auric Goldfinger, which was shot at Stoke Park Golf Club in Buckinghamshire.

Alliss became a regular commentator at the BBC after quitting full-time professional golf in 1969, a decision taken after succumbing to the dreaded ‘yips’ — an affliction he marked with customary humour via the PUT 3 number plate on his Bentley.

By 1978 he was the BBC’s chief golf commentator, following the death of Henry Longhurst, and his languid style was hugely popular.

Speaking about his commentary style, Alliss told Golf Today in 2014: “Statistics don’t really interest me. I’ll come in with a magazine which I’ve scrawled some notes on. Something nobody else understands, like, ‘dog and chicken’, referring to some story or other.”

However, while Alliss was inducted into golf’s Hall of Fame in 2012 in the Lifetime Achievement Category, his commentary began to prove no laughing matter in a number of controversial incidents.

In 2015, as Zach Johnson closed in on the Open Championship at St Andrews, and the camera focused on the American’s wife, Alliss remarked: “She is probably thinking, ‘If this goes in, I get a new kitchen.”’

The BBC subsequently apologised, but it was not until a 2017 interview with Newsweek that Alliss said he did not believe the reaction would have been the same if he had said “a new coat, or a new car, or we’d be able to move into that grand house. It’s just nonsense.”

A year earlier, Alliss had provoked controversy by saying women who wanted to be members of the Honourable Company of Edinburgh Golfers — which owns Open Championship venue Muirfield — had “better get married to somebody who’s a member”.

He added on BBC Radio Five Live: “I want to join the WVS (Women’s Voluntary Service) but unless I have a few bits and pieces nipped away on my body I’m not going to be able to get in.”

Alliss enjoyed a successful spell as a course designer and was responsible, along with Dave Thomas, for Ryder Cup venue The Belfry. He also hosted seven series of ‘A Round with Alliss’ in which he played a few holes of golf and chatted with a variety of famous people around the UK.

Alliss was first married in 1953 to Joan McGuinness. They had two children, Gary and Carol. In 1972, Alliss married his second wife, Jackie, and had two daughters, Sara and Victoria, and two sons, Simon and Henry.