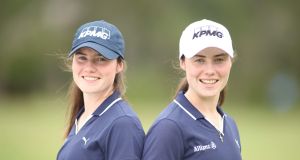 Leona Maguire (left) and Lisa Maguire (right) will this week make their professional debuts at the ShopeRite LPGA Classic.

The Maguire twins – Leona, who has dominated the world amateur rankings for the past two years, and Lisa – embark on their professional careers at the $1.75 million ShopRite LPGA Classic in New Jersey on the front foot after signing with a couple of blue-chip corporate sponsors and joining the management team at Modest! Golf, the agency founded by singer Niall Horan.

Playing on sponsors’ exemptions in the ShopeRite LPGA Classic at Stockton Seaview resort near Atlantic City, the players – as a package – have signed with KPMG, who number Paul Dunne and Phil Mickelson among their sponsorships, and Allianz, a long-time supporter of Paul McGinley, as they set out on their professional careers. Puma Golf apparel are also on board.

Recent graduates of Duke University, Leona and Lisa deferred turning professional until completing their degrees and their appearance on tour – in a tournament which features five of the current top-10 on the Rolex world rankings – has been eagerly anticipated.

“We are committed to investing in young Irish talent in a range of areas and encouraging exceptional people to fulfil their potential,” said Shaun Murphy, Managing Partner of KPMG in Ireland in announcing the global sponsorship deal, adding: “Leona and Lisa have already demonstrated impressive academic and sporting achievements and I’d like to wish (them) our very best wishes for their future careers.” The players will wear the KPMG logo on the front of their caps.

Seán McGrath, CEO of Allianz Ireland, said: “We are delighted to support Leona and Lisa as they begin their much anticipated professional golfing careers. Allianz exists to facilitate people to live their lives to the fullest, who knows what the future holds for Lisa and Leona but we are delighted to play a role in the next chapter of their promising careers.”

In a tweet confirming Modest! Golf agency’s signing of the twins, Horan said he was “delighted” to welcome them and wished them luck.

Leona already has a Symetra Tour card for this season but is entitled to up a number of sponsors’ exemptions on the main LPGA Tour and, with Lisa, has benefited from receiving the opportunity from ShopRite in a tournament which historically has targeted the brightest young professionals. Lexi Thompson and Brooke Henderson are among those who previously made their professional debuts in the tournament.

“It’s a huge honour and a privilege to sign with a firm that is so globally recognised and reflective of our personal values like KPMG,” said Leona of the sponsorship deal. “A lot of amateurs making the jump to the pro game struggled with getting sponsors. To have a sponsor like KPMG believe in both Lisa and I is a huge confidence boost . . . . I’m thrilled to be officially announced as an Allianz ambassador and to follow in the footsteps of Paul McGinley, who also wore the (company’s) logo as he started his illustrious career.”

The Maguires move on to professional careers after stellar campaigns as amateurs which included Curtis Cup and multiple championship successes around the world. Leona dominated the world amateur rankings in recent years – holding the record for the most weeks at number one (of 135 weeks), breaking the record of Lydia Ko in the process – and won 10 collegiate tournaments in her time at Duke, while Lisa is a former European strokeplay champion.

The course: Running along Reed’s Bay on the Atlantic shore, the Par 71 6,217 yards course features many links-like features.

Irish in the field: The Maguire twins – Leona and Lisa – make their professional debuts.

Betting: Minjee Lee heads the market at 15/2, although Anna Nordqvist – a two-time winner of this tournament – is worth a look at 15/1. Leona Maguire is rated a 70/1 chance to make a winning start to her professional career.