Shay’s Short Game: One governing body for golf in Ireland 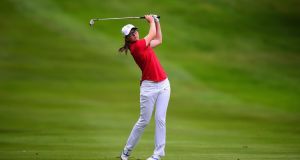 A bid to unite the game of golf in Ireland moved a step closer last week when the GUI and the ILGU agreed to a proposal for the creation of one governing body. It’s taken two and a half years of discussions and consultations to agree on the proposal, which will be put to a vote of GUI and ILGU club members later this year.

If approved, the ILGU and the GUI will be wound down and the arduous task of transitioning to a new organisation, designed to make the sport more inclusive, will begin.

Following extensive discussions and consultation, the Boards of the Golfing Union of Ireland (GUI) and the Irish Ladies Golf Union (ILGU) have approved a Proposal which provides for the formation of a single governing body for Golf in Ireland.

The ILGU and GUI will now prepare for EGMs of the organisations at which affiliated clubs will vote on the Proposal.

In the coming months, Information Packs containing important details regarding the new organisation will be prepared and issued to affiliated clubs. The packs will include the Proposal and all information pertinent to clubs, in the form of an Executive Summary and Frequently Asked Questions.

If the clubs of the ILGU and GUI support the proposal, a transitions phase will commence during which the GUI, ILGU and Confederation of Golf in Ireland (CGI) will be wound down and the new body will be established to carry out all activities currently undertaken by the three organisations.

Irish off the pace as Bailey wins St Rule Trophy

Lianna Bailey from Kirby Muxloe became the first English winner of the St Rule Trophy women’s open amateur trophy at St Andrews since Mel Reid in 2007 as Shannon Burke from Ballinrobe finished best of the Irish.

Bailey had a sensational start to her third round: eagle at the second followed by birdies at the third, fourth, fifth, sixth and eighth: seven-under-par 31 to the turn.

Hannah McCook, recent winner of the Welsh and Irish women’s open amateur stroke-play titles, looked well on the way to a notable hat-trick when she led with a pair of 71s over the New Course but her closing 74 at the Old for a 216 total was only good enough to see her tie for fourth place alongside Chloe Goadby (St Regulus).

Michael McGeady eased to a three shot victory at The Heritage Challenge Pro-Am sponsored by JustGolf.ie on Sunday. The 40-year-old followed up his opening round 64 (-8) with a second round 71 (-1) to top the leaderboard on nine under par.

Moriarty was also in the winner’s enclosure last week when he fired a six under par 66 to claim his second win of the season at the Malahide Pro-Am. The Glasson professional recorded seven birdies and a bogey to finish one shot ahead of Richard Kilpatrick (Banbridge GC).

England’s Nick Poppleton won the Brabazon Trophy in dramatic style when he chipped in on the second play-off hole at Frilford Heath Golf Club, Oxfordshire.

It was an exciting finale to a day of superb golf, played out in hot sunshine, with low scores which included a course record 63 - and a magical eagle which set up Poppleton’s victory in the Englishmen’s open stroke play championship.

The 24-year-old from Wath in Yorkshire was chasing Nienaber for most of the final round. The South African number one had blitzed the third round in seven-under 65 to get to 13-under after 54 holes, two clear of Poppleton.

Nienaber set off like a rocket in the final round. He was five-under after seven holes, 18 under par and, at this stage, five shots clear of Poppleton. But a bogey on the short 11th, where he missed the green, and a double bogey on 14 where he lost his drive in the gorse, pulled him back to 15-under.

Poppleton, playing in the group ahead, was making steady progress and got to 14-under after 12 holes. He needed something more - and he took his chance on the par four 16th, driving the green and holing a 15-footer for and eagle two.

At 16-under par he had overtaken his rival. But Nienaber wasn’t finished. He slotted an eight-footer for birdie on the last to force the play off.

The title was decided on the par three ninth. Oddly, both players missed the green both times they played it - but compensated with superb chip shots. The final day of the championship was marked by low scoring. Andrew Wilson (Darlington) set a new course record of nine-under 63 in the third round, which propelled him into contention.

In the final round, Bailey Gill (Lindrick) shot 67 to finish on 13-under 275 and climb into a tie for third place with Jack Cope, whose putter warmed up over the back nine and helped him to a closing 69.

Chiericato looked to be cruising to victory when she made the first ace of her professional career at the fourth and led on four-under-par with seven holes to go.

But she bogeyed three holes coming in and ended up in a playoff with Heather MacRae, carding a 74 to the Scot’s 72 to leave them tied on one-under.

MacRae had a chance to win on the 18th in regulation play but her birdie putt stopped a fraction short.

But at the par-four first in the playoff, her approach clipped some leaves and fell well short of the green and after missing from six feet, Chiericato made a winning par to claim the silver salver and the £1,000 winner’s cheque. Lynn McCool was 16th on 14-over after rounds of 82 and 78.