Arklow take the honours at a resplendent Mount Juliet 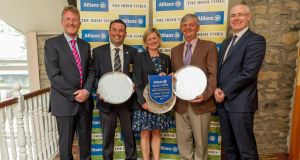 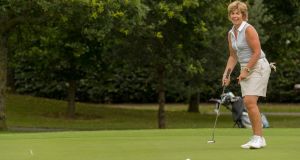 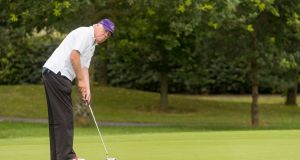 Few wait until the first tee box. The car park in Mount Juliet is the perfect setting to road test the game face while unloading golf bags, electric caddy cars and golf shoes, all the while maintaining a veneer of quiet purpose.

Some travel in hope, many in expectation as there is no middle ground when it comes to the Allianz/Irish Times Officers’ Challenge.

As Jim Leyden grabbed a fistful of balls and tried to stuff them into a pocket in his golf bag, one escaped, gathering momentum off the tarmac to scoot away before disappearing from view beneath parked cars, tantalisingly out of bounds to a recovery process. Traditionally it’s the course rather than the car park that threatens to bring golfers to their knees.

The gentle sigh that escaped the K Club captain would be replaced some six hours later by a broad smile as his club claimed one of the four qualifying places on offer for the national final this month, coincidentally over the Smurfit course, where the club will look to defend the title they won last year: more of that anon.

Mount Juliet was resplendent in the warm sunshine, a beautifully manicured golfing playground from the verdant fairways to the pristine putting surfaces; it was easy to understand why Tiger Woods once stated that those greens were among the best on which he had putted in his career.

The Kilkenny venue is undergoing a significant redevelopment including a new hotel but there is no disruption to the tranquility and charm of the Jack Nicklaus-designed layout, nor indeed the welcome.

As a test of parkland golf there are few better as the 18 three-person teams discovered. The warm sunshine imposed a physical tariff as three of the four qualifiers on the day all amassed appreciably more points on their opening nine holes.

The Arklow Golf Club team of men’s captain Mark Byrne (11), lady captain Bernie Darcy (9) and club secretary Bob Deignan (12) had a couple of points to spare in victory. Starting on the 10th they opened their account with six points on the par five and at the next Byrne saw his tee shot at the par three come up millimetres shy of the cup.

Deignan explained: “It was literally a roll short.” For those who crave detail, Byrne, an 11-handicapper, hit a wedge for the tee shot in question and he was to prove a significant contributor throughout the round, coming in at 16 of the 18 holes. He smiled: “I played out of my skin.”

He also offered an insight into an impromptu team talk that the lady captain gave on the journey down. “I’m not going to tell you what she said coming down in the car. I think it was something like ‘we are in it to win it’. She said it more than once.”

Darcy, for her part, laughed: “I had to fight to get on the card because the boys played phenomenal golf. The front nine was playing a lot tougher. The heat got to us as well. It was incredibly hot out there.”

Arklow’s closest pursuers proved to be the Naas triumvirate of men’s captain Kevin Redmond (16), club president Michael Moran (17) and lady captain Catherine Grogan (21), whose 44 points on the back nine, their opening nine, was the best split of the day.

Unfortunately they couldn’t sustain that momentum coming home in 32 points. Grogan smiled in explaining the drop off: “We started to play to our normal levels. We probably stopped trying to impress one another.”

Redmond’s good-natured assertion that having hit the wall after 12-holes of their round they decided to preserve a little for the final will face the litmus test of the K Club at the end of the month.

The final two qualifiers share a common achievement in that both clubs have previously won the national final. The Woodenbridge team of Trevor Prestage (6), Sandra Warde (14) and Declan Tanham (12) finished third and will be hoping to repeat the feat of four years ago.

Warde explained: “There probably was a little bit of expectation because Woodenbridge have won the competition before [in 2013], so we had a little pressure on us. Everything about the day from start to finish was lovely. We got off to a good start, a dip in the middle but finished strongly.”

Despite his claim of pre-round nerves and being slightly overawed by the ability of his playing partners, it should be noted Leyden contributed to the team score on 16 of the 18 holes.

The remaining regional qualifier will take place at Galway Bay later this month with the national final scheduled to be played at The K Club on August 28th.

Postscript: If anyone found a slightly scuffed Srixon 2 in the Mount Juliet car park, do the right thing.